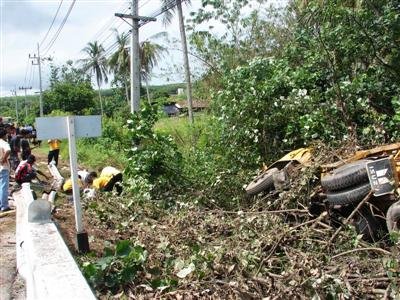 PHUKET: A water tanker overshot a dangerous curve in Phuket this morning, leaving the passenger dead and the driver badly injured.

The accident happened at about 9:30am on Thepkrasattri Road northbound, along a stretch of road known as the “Bang Duk Curve”.

The six-wheeled vehicle, owned and operated by the Phuket Provincial Administration Organization (OrBorJor), was on a routine delivery of water at the time.

When they arrived, driver Somchai Kitprasert, 30, was standing nearby, dazed and covered with blood.

One team of Kusoldharm Foundation workers rushed him to Thalang Hospital for emergency treatment, while another prepared Mr Prayoon’s body for transport to the morgue at the same facility.

An initial investigation at the scene failed to reveal what caused the truck to breach the guard rail and take out a wide swath of roadside thicket before coming to rest on its side, Lt Col Prakob said.

OrBorJor Public Works Division acting chief Wasana Rongphol, who was at the scene, told the Phuket Gazette the water truck was delivering 6,000 liters of water to Mai Khao government offices at the time of the accident.

The OrBorJor has conducted this service regularly over last two months, he said.

“This is because of poor engineering. This issue has been raised many times in OrBorJor council meetings and with the Phuket Provincial Highways Office, which is responsible for this road.

“As nothing has been done so far, I urge drivers to slow down in these areas. This is for their own safety,” he said.