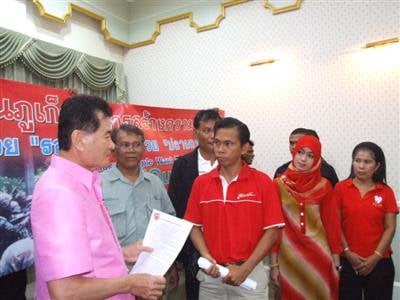 PHUKET CITY: Members of the Phuket branch of the National United Front for Democracy Against Dictatorship (UDD) this morning visited the Governor’s Office to protest government plans to invoke the Internal Security Act in Phuket during the upcoming Asean summit.

Dressed in their trademark red shirts, a group of about 20 UDD members led by Wisut “Ae Inside” Tangwittayaporn presented Phuket Governor Wichai Phraisa-ngop with a letter stating that they have no plan to cause a disturbance during the summits, scheduled to take place at the Hilton Phuket Arcadia Resort in Karon on June 13 and 14.

“We will not rally or do anything to destroy the reputation of Phuket and Thailand during the meetings,” said Mr Wisut, who is also editor of the local political journal Inside Phuket.

“We will co-operate with the people of Phuket to prevent the “other color” group from causing any disturbance during the meetings,” he said.

Mr Wisut was speaking in a clear reference to the yellow-shirted People’s Alliance for Democracy (PAD), whose members last year occupied Government House in Bangkok and forced the closure of the two main airports in Bangkok.

However, Mr Wisut said the UDD continues to oppose the government of Prime Minister Abhisit Vejjajiva and its decision to invoke the Internal Security Act in Phuket during the meeting.

“The Security Act will impact tourism in Phuket. Tourists will be frightened when they land at Phuket International Airport and see soldiers armed with assault rifles,” he said.

Given that Phuket and six other nearby provinces are the power base of the Democrat Party, there is no reason to invoke the Act in Phuket or surrounding provinces, said Mr Wisut.

While admitting to his role in mobilizing red-shirt followers to take part in demonstrations at the aborted summit in Pattaya over the Songkran holiday, Mr Wisut insisted his goal is political reconciliation across the entire country.

To achieve this, Prime Minister Abhisit must call on his party members to stop accusing the red shirts of being the cause of violence, he said.

“If his party’s members don’t stop barking at the red shirts, there is no way to have reconciliation in Thailand,” said Mr Wisut, who in 2007 ran unsuccessfully for a seat on the Phuket Provincial Administration Organization during a by-election in District 1.

He came in third with just 273 votes to 839 for the winner, Democrat Party member Somkuan Tansakul.

Gov Wichai accepted the document, saying he wanted nothing more than the Asean summits to go smoothly.

“If everyone comes together to host a successful series of meetings, it will benefit the entire island by enhancing Phuket’s reputation as a safe tourist destination,” he said.

If any Phuket people are unhappy about the meetings, they should drive the governor off the island rather than take part in anti-government demonstrations, he added.