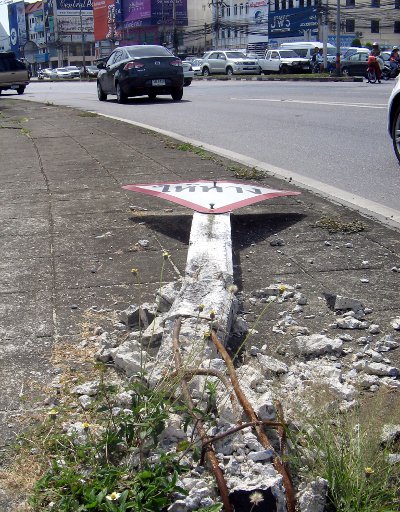 PHUKET: Today marks the last day of the “Seven Days of Danger” holiday road-safety campaign. No fatalities were recorded in Phuket yesterday, Day 6 of the campaign, with the number of fatalities standing at six.

According to official figures from the Department of Disaster Prevention and Mitigation Phuket Office (DDPM-Phuket) this morning, Day 6 ended with nine serious injuries in eight reported accidents, but no deaths.

Among the injured was one foreigner, listed as Canadian national Daniel Frewing, age 63.

Mr Frewing was driving fast without a helmet when he lost control of his motorbike on Sakdidet Road in Baan Borrae, Wichit, according to DDPM-Phuket notes of the accident.

The Canadian was taken to Bangkok Hospital Phuket for treatment of injuries, the gravity of which were not reported.

Of the eight accidents reported yesterday, half were attributed to drunk driving. In these cases all of the victims were Thai males in their 20s and 30s.

The youngest accident victim yesterday was three-year-old Nassaroot Bandam, who fell from a motorbike driven by his father in Pa Khlok at about 10am.

The child was injured when his dangling feet got caught in the motorbike’s rear wheel, wrenching him off the vehicle.

The extent of his injuries were not reported, but the DDPM-Phuket log notes that the boy was rushed to Thalang Hospital for emergency treatment and then referred to the better-equipped Bangkok Hosptial Phuket in Phuket Town.

Yesterday’s accidents bring the six-day total to 66, with six fatalities and 70 people suffering injuries requiring admittance to a hospital.

So far during the campaign, 44,125 vehicles have been pulled over for inspections at police checkpoints in Phuket, with 3,554 charges levied. Eighteen people have been charged with drunk driving in Phuket since the campaign began.

There were 312 accidents reported, with 32 people killed and 333 others injured on Day 6.

Update: The above-referenced Mr Frewing contacted the Gazette to say that he was wearing a helmet at the time of the accident, but that he removed it as he pushed his vehicle to the side of the road.

Work on Central Phuket underpass to start this year