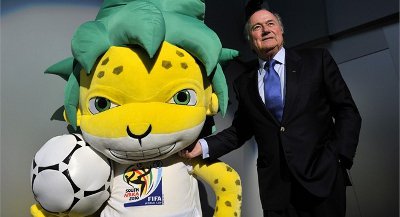 PHUKET: Phuket Gazette readers will have noticed, a few days ago, that we launched a dedicated Phuket Gazette web page expressly for football fans in Phuket needing their daily fix of the 2010 FIFA World Cup, which kicks off tonight in South Africa.

Just click on the 2010 World Cup button in the right margin (toward the top) of this page to see the latest news, scores, fixtures, photos and videos – all direct from FIFA.

For those who like something they can physically get their hands on and view quickly, the hard-copy Phuket Gazette newspaper due out this afternoon contains a very special four-page wall chart supplement. With it, you’ll be able follow all the matches, from the group stages right through to the final on July 11.

All fixtures are listed in Thai time, so you won’t miss a single match.

After the gala opening, the World Cup proper will kick off tonight at 9pm (Thai time) between hosts South Africa and Mexico at the Soccer City stadium in Johannesburg.

South Africa have their work cut out for them tonight. The host nation’s squad have appeared in only two FIFA World Cup tourneys, while the in-form Mexicans have competed in 13 World Cups and beat Italy by 2-1 in an international friendly on June 3.

In Cape Town, 1998 World Cup champions France will take on Uruguay, who won the first World Cup back in 1930 and repeated the feat again in 1950.

The world-class football continues for a month, climaxing with the final kicking off on July 12 at 1:30am (Thai time).

So sit back, enjoy the games, cheer your country and keep track of the latest World Cup developments right here at the Phuket Gazette.