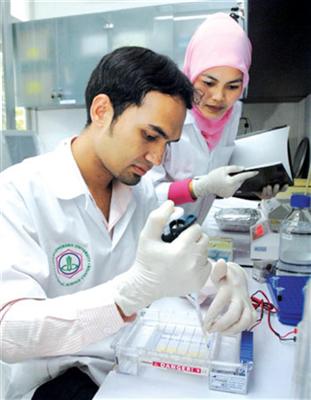 PHUKET TOWN: The Phuket Andaman Halal 2010 fair will showcase the island’s Muslim culture, traditions and foods in Saphan Hin from June 18 to 20.

The event has been organized by the Phuket Provincial Administration Organization (PPAO) in conjunction with the Phuket Islamic Committee Office, the Halal Science Center of Chulalongkorn University, and the Tourism Authority of Thailand (TAT).

The five-million-baht event, being held for the second time, will be chaired by Sheikhul Islam Aziz Phitakkhumphol, advisor to HM The King on Islamic affairs.

There will be many activities and stage performances, including a performance by the Malaysian Muslim band Royhan, who are well known in Malaysia and among Thailand’s southern Muslim population.

Around 70 halal food and product shops will be set up along with exhibits displaying local Muslim culture and way of life.

The fair will also host an actual Thai Muslim wedding ceremony, with a local couple tying the knot with blessings from Sheikhul Islam Aziz.

Some of the halal food shops participating event will be further promoted as recommended halal restaurants in a TAT guidebook.

PPAO president Paiboon Upatising said, “All of the restaurants chosen for the festival meet halal standards and we need to promote some of the delicious ones so that they are known among Muslim tourists.”

The PPAO aims to attract Muslims from Phuket and nearby provinces in hopes of boosting domestic tourism, he said.

It is also hoped that the event will help promote Phuket’s Muslim culture on the international stage, as the PPAO will be hosting an Indonesia-Malaysia-Thailand Growth Triangle (IMT-GT) seminar at the same time.

Mr Paiboon pointed out that Muslim halal businessmen and Muslim people from all three countries will be attending the seminar, and that, “They will be able to experience Phuket’s halal food and local Muslim culture at the fair.”

The IMT-GT was established in 1993 by leaders of the three countries as a framework for international economic cooperation to boost development in areas of Indonesia, Malaysia and Southern Thailand.

The seminar, chaired by Deputy Prime Minister Dr Trirong Suankiri, will be held at the JW Marriott Resort and Spa in Mai Khao on June 19 and 20.

At the meeting, members will discuss standardizing the usage of the term halal.

Halal is used to designate an object or action, often food, as legally permissible according to Islamic law.

“Creating a halal standard is one way to encourage economic development in the IMT-GT. Before, the only Thai area included was Haad Yai. Now the triangle has been expanded all the way to Ranong, meaning Phuket is now part of it,” said President Paiboon.

“We are benefiting from that as more tourists from Indonesia and Malaysia are visiting Phuket,” he added.