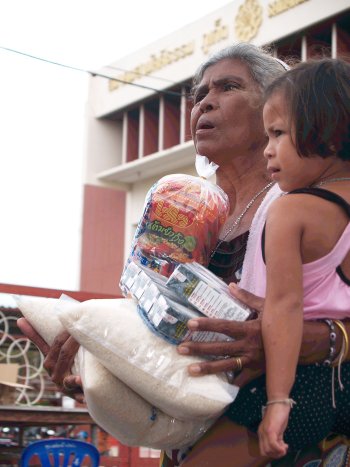 The Kusoldharm Foundation began its preparations by holding two days of ancestor worship at their headquarters on Phun Pol Rd Soi 9 last week.

The event, including various merit-making activities, also saw 122 scholarships of 2,000 baht each being handed to needy students at local schools.

Also given away to the poor were 3,000 “food packs” containing dry foodstuff. Most of the recipients were Phuket sea gypsies invited to attend.

The Por Tor Festival begins on the first day of the waxing moon in the seventh Chinese calendar month, a time when adherents pray for the souls of ancestors and make food offerings to appease “hungry ghosts” that might otherwise wreak havoc on the living.

Kusoldharm President Benjawan Tamphanuwat told that the Gazette that the foundation set aside one million baht for the event.

“It was just a small group of workers who had problems. They didn’t want us to do ‘right’ things. Some of them who couldn’t accept the rules have already quit. Now everything is in order,” she said.

She declined to comment further, asking the press to focus more on the foundation’s positive contributions to society.

“It was a messy internal affair. I don’t want to speak about it as it could damage the foundation’s image. I would prefer to talk about the donations being made today,” she said.

A highlight of the Por Tor ceremony at the market on Ranong Rd will be the presentation of red turtle-shaped sweets known in Chinese as Ang Ku, at 2:30pm, August 26.

Other highlights of the festival include:

– August 27: Offering of alms to monks at Ranong Road Market, starting at 9am;

All events are open to the public and tourists are encouraged to attend.