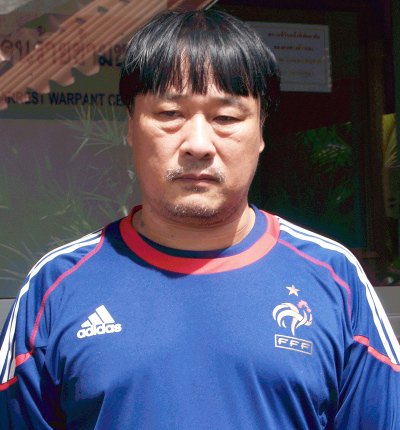 PHUKET: As reported in the Gazette’s Phuket NEWS Hound earlier today, Phuket Immigration Police yesterday announced the arrest of a man wanted for drug smuggling eight years ago in his native Taiwan.

He was arrested at the Mei Zhou Phuket Hotel on Luang Por Wat Chalong Rd on the east side of Phuket Town on August 10.

Col Panuwat said the Taipei Economic and Cultural Office of Thailand had asked Phuket Immigration to arrest Wu after receiving information that he was in hiding in Phuket.

A check of Immigration records revealed that Wu entered Thailand legally on a non-immigrant business visa at Suvarnabhumi Airport, Bangkok, on October 27, 2009.

He was later issued a retirement visa and a one-year extension of stay that would have allowed him to stay until January 2011, but the permit-to-stay ended when the visa was revoked on August 4.

In December 2002, Wu hired a fellow Taiwanese man to ship ya ice (crystal methamphetamine) from Fujian, China, back to his native country, the police press conference was told.

The vessel was intercepted as it entered Taiwanese territorial waters and a search found 30.26 kilograms of the drug on board.

The current street value of the seized drugs would be about 100 million baht, and about four times that amount in Taiwan, Col Panuwat said.

The man told police that Wu reportedly paid him about 600,000 Taiwan dollars (today about 600,000 baht) for his role in the smuggling operation.

Wu will be extradited to Taiwan, where police in Taipei will continue their investigation.

Col Panuwat said the arrest followed the suspect’s blacklisting by the Transnational Crime Arrest Warrant Information Center, which has branches in Bangkok, Pattaya and Chiang Mai, as well as Phuket.

There are currently more than 3,000 people listed in the center’s database, including foreigners wanted for crimes committed in Thailand as well as international fugitives whose names and other information were provided by international crime fighting organizations such as the US Federal Bureau of Investigation (FBI) and US Drug Enforcement Agency (DEA), or their counterparts in other countries around the globe.

Col Panuwat asked for greater cooperation from the public in helping authorities to catch international criminals.

He urged the public to report suspicious or criminal behavior by foreigners by calling Phuket Immigration at 076-212108 or through the department’s website at phuketimmigration.go.th