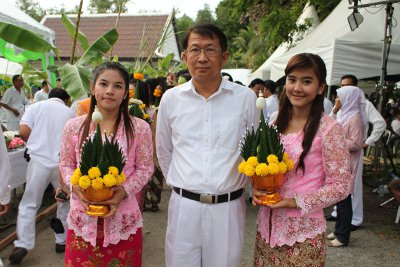 PHUKET: In the run-up to the highly-anticipated re-enactment of the Battle of Thalang tonight, Phuket students and local leaders yesterday made offerings to a shrine dedicated to Phuket’s two heroines: Thao Thepkrasattri and Thao Srisoonthorn.

The 15th annual ceremony was, for the first time, this year held at at Wat Muang Komarapat following a decision by the organizing committee. The event was in previous years held at the Heroines’ Monument roundabout, an area known for traffic congestion.

Ampol Sakulchan, Chairman of Thalang Culture Council, said that Wat Muang Komarapat is an old temple in a place of considerable historical interest. The site was also once home to a military barracks located near the homes of the beloved Phuket Heroines.

The ceremony was held yesterday in order for worshipers to pay respects and wish for luck before tonight’s re-enactment, which marks the date that Thao Thepkrasattri and Thao Srisoonthon rallied the locals to defeat an invading army from Burma in 1785.

Assistant Professor Sawit Pongwat, Director of the PKRU Arts and Culture Center, said almost a thousand local residents and students from Phuket and Phang Nga had been rehearsing for two months to put on a successful re-enactment tonight.

In tonight’s show Thao Thepkrasattri will be played by Suphangphun Korsantiwichai and Thao Srisoonthorn by Pornthip Wiwattikul.