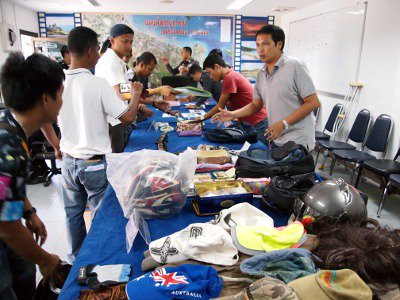 PHUKET: Police are urging residents in Chalong whose houses have been robbed recently to come forward and claim items recovered after the arrest of two suspects landed more than 100 stolen goods.

The two are charged with theft at night, illegal possession of a firearm and ammunition, carrying a firearm in a public place and resisting arrest.

After obtaining an arrest warrant, Chalong Police Deputy Superintendent Boonlert Onklang led a team of officers to an apartment in Phuket Town where Thawatchai and Jenjira were arrested.

In the apartment officers found one .38 handgun, eight bullets, a handmade gun and 104 stolen items, including Buddha amulets, a sword, clothes, boxing gloves, watches, cameras and other items.

The suspects confessed to robbing eight houses in Chalong and another in Thalang, said Lt Col Boonlert.

Chalong Police were aware of the couple’s illegal antics for at least a week before their arrest, he added.

“Chalong Police had received many complaints from foreigners that their homes had been robbed,” he said.

The couple were nearly apprehended last Wednesday, when at about 11:30pm a patrol officer saw the couple riding a motorbike along Patak Road in Karon.

As Thawatchai and Jenjira and the motorbike they were riding matched a description of suspects wanted by the police, the officer stopped them at the entrance to Patak Road Soi 16.

The couple fought the officer and finally Jenjira pulled out a gun and threatened to shoot the officer if he did not let them go.

The couple left the motorbike behind and ran off on foot.

Under the motorbike seat, the officer found the license plate KorLorWor 188 Phuket. He also found a wig and a baseball cap.

Later that same night, police received a report that Noppra Pirapada was threatened at gunpoint to hand over his motorbike.

The couple sped off toward Karon Circle, but apparently failed to negotiate the curve in front of Karon Temple.

Picking themselves up off the ground, Thawatchai and Jenjira then forced 52-year-old passing motorist Suwannee Tipnoo to hand over her motorbike.

However, while getting on the motorbike, the gun accidentally fired, shooting Thawatchai in the right leg, Jenjira told police.

Although he had just been shot, Thawatchai opened the throttle and sped off toward Patong with Jenjira sitting behind.

At the press conference yesterday, 23-year-old Monthicha Mooksri told the press that she saw Thawatchai and Jenjira walking away from her home in Rawai, where she lives with a foreigner, on February 19.

“I came home at about 11pm. I saw the two walking away from the house back to their motorbike. I ran after them and I grabbed my [laptop] computer back, but they took off with my iPad and 4,000 baht cash,” she said.

However, Miss Monthicha did not get her iPad back.

“The couple sold off all the electronic items they stole before we arrested them,” Lt Col Boonlert said.