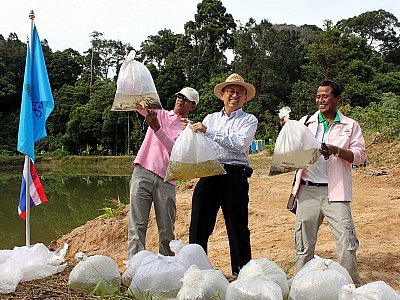 PHUKET: Visitors and residents in Phuket will have ample opportunity to honor and celebrate HM Queen Sirikit’s 79th birthday – also celebrated in Thailand as Mother’s Day – on Friday.

Police sources have confirmed to the Phuket Gazette that alcohol sales will not be banned on Friday, a national holiday.

“We only ask for people to comply with [the ban of] alcohol sales and purchases on Buddhist holidays,” explained Capt Thapakorn Hanumard of the Phuket Provincial Police.

“We have not received any orders to ban alcohol on Mother’s Day, so you can still sell and buy alcohol on that day,” he said.

Despite of no official ban on booze, readers should be mindful of Thai etiquette and avoid public intoxication at family outings and public ceremonies, which is frowned upon in Thai culture.

At 7:19pm on Friday, lights will go out across the country as millions of loyal subjects light candles in unison to honor the birth of HM The Queen.

Celebrations will be across Phuket. Officials in Tambon Sakhu, on Phuket’s northeast coast, will begin their celebrations tomorrow with ceremonies at Wat Mongkol Wararam School, behind Wat Nai Yang, from 4pm.

In Rawai on Thursday, ceremonies will be held near the entrance to the Nai Harn Lake park from 5:30pm.

On Friday, celebrations will be at Phuket’s main residential areas below as follows:

The public can sign an official birthday best wishes book at Phuket City Hall from 8.30 to 9am. Festivities at Saphan Hin park in Phuket Town from 4.30pm to 7pm, including stage performances, live music and Phuket Governor Tri Augkaradacha singing HM The Queen’s anthem. Event to conclude with a mass candle ceremony.

Ceremonies at Loma Park from 1pm. Parade along the beach road from the Sea Pearl Resort to Loma Park from 2:30pm to 3:15pm, followed by stage performances by local students. Official musical ensemble at 4pm, when Gov Tri is “expected” to arrive.

Ceremonies at Kathu Municipality offices from 5:30pm, including stage performances by local students and concluding with a mass candle-lighting ceremony.

Ceremonies at Sri Puwanat public park, across from Laem Chan Health Station, starting at 5pm, including stage performances by local students and concluding with a mass candle-lighting ceremony.

Ceremonies at the football field of Hongyok Bumrung School from 6pm.

Other festivities being held in honor HM Queen Sirikit’s birthday include:

Phuket City Municipality will host a mass tree-planting activity tomorrow, starting at 9am, near the Employment Office in Phuket Town. Cherng Talay Municipality will do the same at the public park near Surin Beach at about the same time. Governor Tri is expected to join from 9:30am to 10am, and to sing two royal songs. The tree-planting is expected to be finished by midday.

The Royal Thai Navy will release 80 sea turtles, 2,009 bass fishes and about one million shrimps at a public event on the beach in front of the Third Naval Command at Cape Panwa tomorrow, starting at 9am. Afterward, from 1pm to 3pm, Navy sailors will lead a community cleanup around the pavilion of the late Admiral Prince Abhakara Kiartivongse, Prince of Chumphon, at Saphan Hin.

Gov Tri will officiate a ceremony organized by Phuket City Municipality to offer alms to 79 monks at Queen Sirikit Park in Phuket Town on Friday, starting at 6:30am.

At about the same time, there will be alms offerings to monks at the Rassada Municipality offices, starting at 7am.