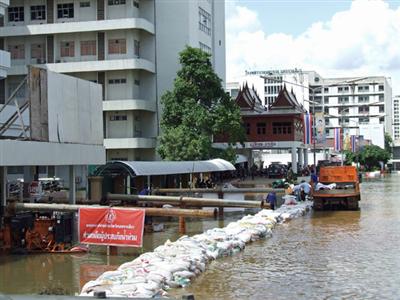 PHUKET: The People’s Alliance for Democracy (PAD) in Phuket has joined the relief effort for flood victims in Thailand’s north and northeast.

Charoensamanakij Temple, behind Phuket Provincial Court, is the collection point for supplies.

The group is liaising with the Kusoldharm Foundation to arrange transport for the supplies to hard-hit areas.

However, the state-run news agency also reported that the central provinces of Bangkok, Ayudhya, Nonthaburi and Pathum Thani are on alert for possible flooding along the banks of the Chao Phraya River.

Thai Prime Minister Abhisit Vejjajiva today inspected the unfolding flood situation in Nonthaburi, which is upstream from the capital.

PM Abhisit is scheduled to chair a meeting of the newly-formed task force to help flood victims as the flood situation remains critical in some areas.

He appointed Sathit Wongnongtoey of the PM’s Office as chairman of the committee, which will work with agencies in rehabilitation work, restoration of infrastructure and providing assistance.