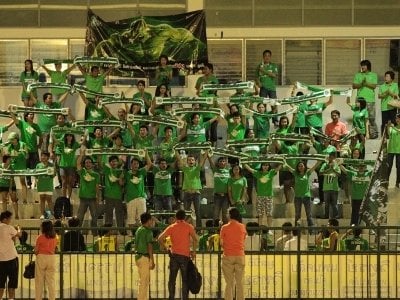 PHUKET: FC Phuket drew on the road at Rayong FC last night, making success in this Saturday’s home match against undefeated Chainat FC crucial to their chances for promotion to Division 1 of the Thai League.

In last night’s game in the AIS Regional League “mini-league” playoffs, FC Phuket went in with one point following a road draw at Samut Prakarn. Rayong FC went into the match with three points after trouncing Loei City 4-0 in Loei.

The first half of last night’s match ended scoreless.

Rayong FC’s Camaroonian midfielder Tchobe Leukoue got the scoring underway in the 57th minute, but the Rayong fans didn’t have long to celebrate as FC Phuket teenage sensation Adisak Kraisorn equalized just two minutes later. Play ended with the teams even at 1-1.

“The second game with Rayong was better than the first game at Samut Prakarn, but the next game will be a real challenge as we are playing the group leader. We will do our best and hope to get a good result,” he said.

The Saturday night showdown, which kicks off at 6pm at Surakul stadium, is against high-scoring Chainat FC, who found the back of the net eight times while crushing their first two opponents.

The Southern Sea Kirin will return to Phuket tomorrow and immediately begin training for the match, easily the biggest in the fledgling club’s history.

The top two finishers in each group will be promoted to Division 1.