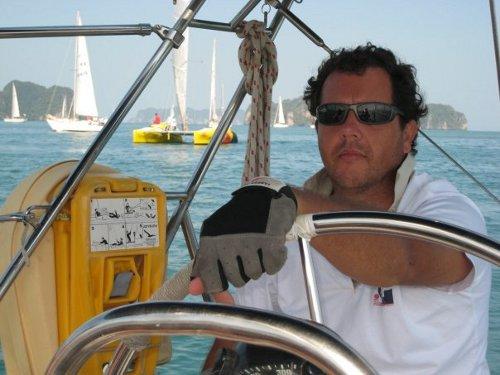 Kevin, 42, was recently diagnosed with stage three colon cancer, but does not have the health insurance needed to cover the critical surgery.

“It was a great event. More than 200,000 baht has been raised already,” said friend Ali Goebel.

Prizes totaling about 60,000 baht were raffled off at the event, including a brand-new Honda Wave motorbike.

“The man who won it was a ‘friend of a friend’ in Australia, so in the true spirit of the event, he just put it in to be raffled again,” Ali said.

The fund raising continues with an all-day charter tour of Phang Nga Bay up for grabs.

“There are 35 tickets left – and only 40 tickets available in total,” Ali explained. “The trip includes a stop at the world-renowned snorkeling site Koh Khai.”

The ACYC will host a quiz night on Saturday December 22, starting at 7pm, to raise more funds. A raffle of donated items will also be running that night.

“A big ‘thank you’ goes out to the whole of Phuket as a community. The support has been tremendous, with people from all over the world making donations,” Ali told the Phuket Gazette.

Kevin’s prognosis is positive, as long he receives the required treatment as soon as possible. The treatment, including surgery, is expected to cost up to 500,000 baht.

“Kevin has been consulting with specialists about post-surgery living and how this will affect his diet and other aspects of his life,” Ali explained.

Originally from South Africa, Kevin moved to Phuket about eight years ago and has sailed in many Phuket regattas. He has since become a familiar face at the Phuket Race Week and Phang Nga Bay and Phuket King’s Cup Regattas.

Any persons wanting to make a donation – cash or a prize to be raffled – are urged to email ourfriendkevin@gmail.com