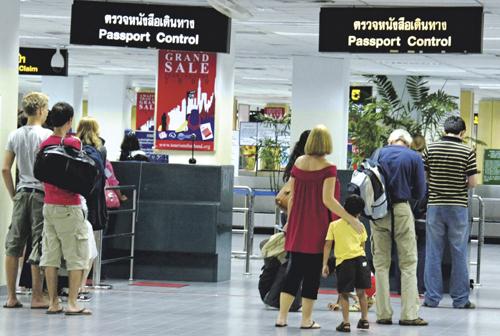 PHUKET: “I’m as mad as Hell, and I’m not going to take it anymore.”

Remember that infamous Hollywood line? Network – Peter Finch going out in a blaze of glory for the entire world to see.

In this case what’s driven me to the edge of madness? The place inhabited by bums in torn clothes, religious zealots and all manner of stark raving lunatics is the Phuket International Airport.

But isn’t travel supposed to unlock a world of possibilities, expand your cultural horizons and make you into a more rounded spec in this ant farm called humanity? Of course it is, unless you happen to roll those dice and find yourself at the dubious facility on the north west corner of the island.

Some may call it a portal to adventure but in my case the past few months have been a dark trip downtown, midnight in Hades and a harrowing visit to hell on Earth.

This is of course the parking lot of the punctually abbreviated PIA.

Today was the absolute last straw and it’s not even peak season yet. Arriving mid-afternoon at the airport, I was greeted with a scene out of ‘Carmageddon.’

All the parking slots filled, and also the lanes, with those frightfully optimistic people who just leave their Honda subcompacts and Isuzu pickup’s in neutral.

Yet this wasn’t enough, trucks were jammed up on sidewalks, wedged between planters, and the single row of ‘neutrals’ was three deep.

Throw in one-way traffic, gridlocked in both directions, heading directly into the oncoming mass of auto carnage.

Horns blared, tempers flared, it nearly resembled one of those encampments in Egypt’s Tahrir Square. If only I could find some shade in the blazing sun.

Yet, in all their wisdom the AoT had mysteriously cut down all of the trees in the parking lot a few months ago due to safety concerns.

What could that be – falling leaves? What about the towering billboards now lording over the chaos below. You take your life in your hands just trying to get to the terminal past the
speeding airport taxis.

In a parallel universe, that place where logic takes place – say in Singapore – you don’t have to park at the airport as you can take a meter taxi.

Even at arguably Asia’s worst gateway, Manila, you can still get a metered taxi.

But not Phuket. I’m not even going to delve into that subject.

And yet as we head into our best high season ever, and the scales are prepared for 5 million arrivals, what does AoT have to show for their work?

My mind wanders. Yes I have lust in my heart, just like the earnest chipmunk himself Jimmy Carter. But it’s not for female companionship. It’s to vent, rage and explain what an utter disgrace the island’s airport has become.

Viewing a far fence ahead, I have to wonder, why can’t they simply build an airport parking lot extension next door, on the vacant land? Why are two football fields of parking cordoned off for buses when none are parked there?

So many questions. So much angst. And yes, what are the options? Drive to Singapore? Or Berlin? Or Hong Kong?

A departing plane captures my attention for a moment as its jet wings reach to the sky – showing off the slogan, “Now Everyone Can Fly”.

Maybe, but that depends on if they can find a parking place at Phuket International Airport.