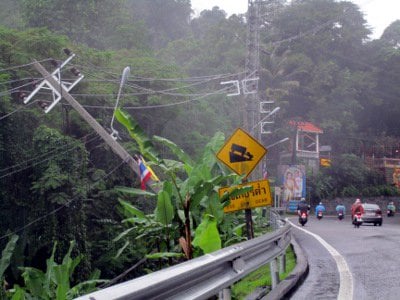 The poles were undermined by a mudslide on October 5 following days of incessant downpours.

The Provincial Electricity Authority (PEA) Phuket office has been attempting to replace the poles. The current plan is to have the poles removed by the end of the week, with replacements installed by next week.

However, foul weather conditions continue to cause problems for workers.

“We are preparing the equipment to install 14 poles on the other side of the road, because of slope stability problems on the side where they are now,” PEA Phuket chief Somchai Krueapat said earlier this week.

Replacement work will start at the Chinese shrine and stop just shy of the Patong City welcome sign.

The PEA does not want to block views of the sign by passing power cables in front of it, he said.

Local residents will not suffer power blackouts while the poles are being replaced, but electricity will be cut temporarily when power is connected to the new poles, he said.

Residents in affected areas will be warned of impending power interruptions, which should not exceed half a day, he said.

Traffic on the notorious road could worsen considerably when the work is underway as it will require closure of yet another lane.

One westbound lane on the Kathu side has been closed since last week by the Highways Department, which fears it could collapse.

A section of the breakdown lane that emerged on the Patong side received temporary repairs yesterday, raising even greater concern about the stability of the road foundation.