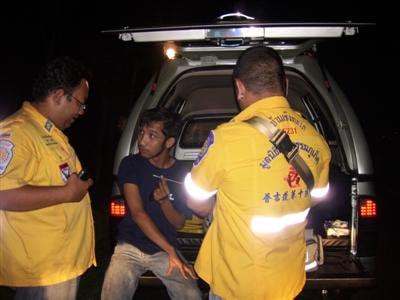 PHUKET: Heavy rains in Phuket’s Thalang District on Saturday night left a passenger van on its side and a pickup truck badly damaged in separate incidents.

All five occupants walked away with only minor injuries.

One of the crashes occurred on Route 4027 in Pa Khlok at about 11am.

A silver passenger van driven by 31-year-old Suthee Jareornpakdee was transporting hotel security staff to their work at a resort at Ao Por when the driver lost control opposite Baan Para Mosque.

The vehicle went into a spin and flattened a road sign alerting motorists to the presence of the place of worship before turning over onto its side.

No other vehicles were involved.

At about the same time in Tambon Thepkrasattri, a black Toyota Vigo pickup went into a spin and crashed into power pole along Route 4031 – the road to Nai Yang Beach – in Baan Mud Dok Khaw.

Kusoldharm Foundation workers treated the driver and his passenger at the scene for minor abrasions.

No other vehicles were involved.

The 24-hour forecast from the Meteorological Department for Phuket for the period starting at noon today calls for hot daytime conditions with widely scattered thundershowers covering 20% of the area in the afternoon and throughout the night.

Motorists are advised to slow down when roads are slippery and wet.

Case of the crabs: Phuket expert speaks out