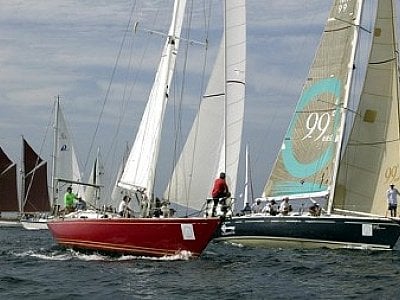 PHUKET: The owner of yet another yacht anchored in Chalong Bay has stepped forward with an offer of a reward.

Horst Lakits, owner of the well-known Phuket yacht Big A, told the Phuket Gazette this afternoon that, “I have been living in and around Phuket since 1991, and this is the first time [my boat] has been broken into [here].

Unlike the reward offered on Friday by Roger Harris, the 61-year-old Australian owner of S/Y Simone, who offered 20,000 baht for any information that saw the thieves arrested and his belongings returned, Mr Lakits today told the Gazette: “I offer a 10,000 baht reward to catch the thieve(s) regardless of whether I get my stuff back or not.”

Mr Lakits says that he once had an externally mounted fishing reel stolen from his boat while anchored off Railay Beach in Krabi, but that this time he lost much more.

The fishing and boating gear lost in the current theft totals at least 65,000 baht, he laments.

“There were some boxes with wine and beer sitting there in the open – untouched!” he added.

“The hatch was broken open but not damaged. Also, the hatch was put back so you could not see from a distance that it had been opened,” he said.

“I go to the boat at least every second day,” he added.

The crimson-hulled cruiser Big A is well known as a regular entry in the Phuket King’s Cup Regatta and Phuket Raceweek.

“Before, I was living on the boat; after that, I had Big A for some 15 years up in Yacht Haven and was living at my small resort here in Chalong,” he said.

“I moved Big A to Chalong some seven to eight months ago as I could not handle the heavy traffic on the highway. It was just a matter of time for an accident to happen,” he explained.

“There are always break-ins and dinghies stolen, but this time it has been going on for about two months – that is unusual.

“Normally it’s a ‘hit-and-run situation’… a yachtie in transit needs money and steals something and sails away,” he noted.

Phuket Conundrum: Can greed and thuggery win the battle for tourists?