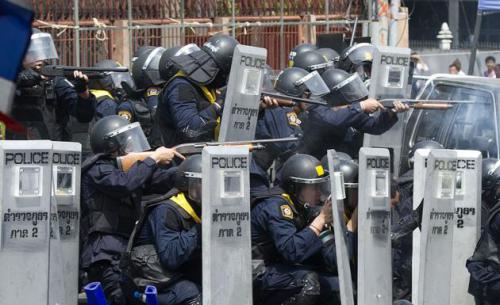 PHUKET: An anti-government co-ordinator in Phuket believes hundreds of Phuket residents will join a mass rally in Bangkok tomorrow, despite the violent clashes between protesters and police that have left at least one officer dead (story here).

“I know our protesters are not afraid of violence, but they must still take care of themselves and follow rally leaders’ instructions. They must not listen to those trying to subvert the cause and lead us into violence. We must forever maintain our peaceful protests for the betterment of our nation.”

“I am not sure how many people from Phuket will join the rally in Bangkok, but I’m sure our support will be felt, as there are many there already and many more on the way since yesterday.”

Mr Amnuay is advising all protesters to take their personal vehicles to Bangkok instead of buses.

“Buses might be stopped from entering Bangkok,” he explained.

Earlier this morning, an eight-vehicle caravan left Phuket for Bangkok, and many other vehicles departed separately, said Mr Amnuay.

Phuket protesters not joining the rally in Bangkok plan to meet at the central protest stage opposite Phuket Provincial Hall.

“This is our one chance to end the Thaksin regime and set our country free. We have no choice,” Mr Amnuay said.