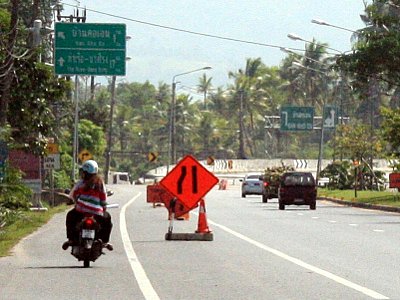 PHUKET: Phuket Vice Governor Somkiet Sangkaosutthirak today confirmed the slew of safety features to be rolled out at the notorious “100 bodies curve” at Kho En in Thalang, in hopes of reducing the number of fatal accidents at the deadly bend.

The move comes after a four-year-old boy and his aunt were killed when a pickup slid out of control on the curve and slammed into a motorbike on November 21.

The accident prompted local villagers to commandeer the southbound lanes at the curve in a protest demanding government action.

“In the short term, the Phuket Highways Office will install ‘traffic poles’ in between the two [southbound] lanes so motorists will slow down and stay in their lanes, and not slide out of control and into people’s houses,” V/Governor Somkiet said today.

“Third, spotlights on poles, together costing about 500,000 baht each, will be installed to brighten the area,” V/Gov Somkiet added.

In the long term, a committee comprising officers from the Highways Office, Mai Khao Tambon Administration Organization (OrBorTor), and other relevant agencies will be formed to oversee that roadwork is undertaken to reduce the sharpness of the bend.

“Some land will need to be expropriated to widen the road at the bend to make it safer. The relevant provincial officers will discuss this with the landlord, and the Highways Office will secure the budget from the Ministry of Transport,” V/Gov Somkiet said.