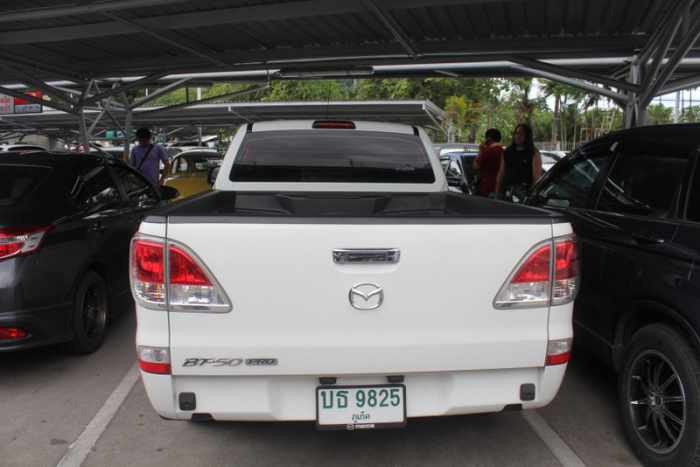 PHUKET: Phuket City Police officers are questioning employees of the gas station whose staff were robbed at gunpoint of more than 900,000 baht in cash yesterday morning.

Police hope to determine whether or not the armed robbery was an inside job, Phuket City Police Superintendent Sermphan Sirikong told the Phuket Gazette today.

“Police believe that the suspects might have relations with some employees at the gas station, as the robbers seemed to know specific details, such as precisely when the cash was being transported to the bank,” Col Sermphan said.

The pick-up driver, Supincha Muangming, 37, and her passenger, Chaweewan Permpon, 24, both told police that they had noticed the men following them when they left the Shell gas station on Phra Phuket Keaw Road in Kathu.

The two women parked the company pick-up truck in the parking lot at the Tesco Lotus shopping center on the bypass road at about 11:30am, and were walking across the car park to deposit the money at a bank in the shopping center when the two men approached them on a motorbike.

The man riding pillion pointed a gun at the two women and demanded the cash. With the loot in hand, the men sped off (story here).

“We are now working hard to find the suspects by collecting as much CCTV footage as we can to determine their escape route,” Col Sermphan said.

“We will also send out undercover officers to obtain whatever information they can from local residents.”

The suspects were both described as having dark skin and thick eyebrows.

The man driving the motorbike is about 175-180cm tall, and was wearing a blue t-shirt with denim jeans and a black-blue helmet at the time of the robbery, Col Sermphan said.

The passenger was about 180cm tall, wearing denim jeans and a black t-shirt with blue polka dots. He wore a red helmet.

Anyone with information that may lead to the arrest of the two men is urged to call the Phuket City Police at 076-212129.

Crazed World Cup fans in Phuket: “Get it here!’