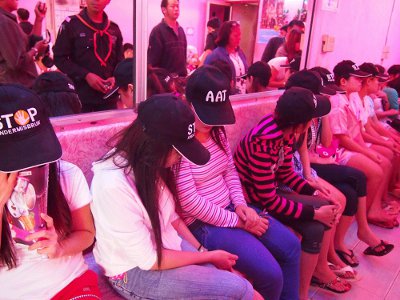 PHUKET: Police have warned nightclub, karaoke and massage parlor operators in Phuket’s party town of Patong that human trafficking and luring young women into forced prostitution will not be tolerated.

The warning came at a meeting in Patong on Wednesday, following the Department of Special Investigations’ (DSI’s) rescue of 41 young women from a sex trafficking ring in a raid in Sungai Kolok, on the Malaysian border, on December 14.

“As a result, 41 Laos females were rescued. Most of them were under 18 years old and were deceived into forced prostitution,” said Patong Police Deputy Superintendent Pratya Chansomwong.

“We fear similar operations are occurring here. If one or two Phuket business owners see this going on in other places, they might be encouraged to try it here. So we met with representatives from businesses that might be of interest to human traffickers. These places include nightclubs, karaoke venues and massage parlors,” he said.

Lt Col Pratya explained to the nightlife venue operators the potential consequences of being caught involved in the lurid trade.

“I warned them that human trafficking is not going to happen in Patong. Anybody that we find involved faces a four to 10-year prison sentence,” Lt Col Pratya told the Phuket Gazette.

“Also, preparing and running places for prostitution will not be tolerated. Should an employee wish to have a sexual relationship with a tourist, then they should find a hotel, not at work. There must be no trafficking of people in Patong,” he added.

At the meeting, the Deputy Superintendent also raised the issue of detection and prevention of drug misuse.

“As a part of the White Patong project testing 10,000 individuals for drug abuse, Patong police are routinely entering private businesses, night clubs and hotels to carry out urine tests. In the past six months we tested 6,000 people for drugs.

“So far only five per cent of those tests proved positive. Those who tested positive were Thai employees, not tourists. Most tourists only drink alcohol,” Lt Col Pratya added.