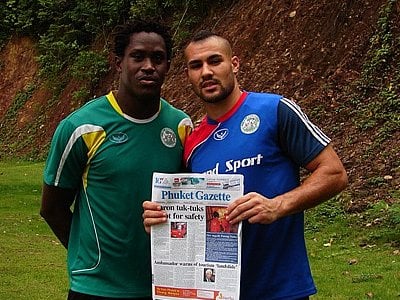 PHUKET: FC Phuket fans will be granted at least one more performance by local football stars Kone Adama and Johnathan Matijas on Christmas Day, in the team’s last match of 2011 against Air Force United.

The news follows rumors circulating on Phuket FC’s fan club website that none of the current five foreign players will continue with FC Phuket next season, due to recent financial hardships.

Matijas from France, and Adama from the Ivory Coast both confirmed to the Phuket Gazette today that they have not yet been offered contract renewals, which expire on December 31.

“It’s a shame as I would like to finish out the season, but after this Sunday, I’m not obliged to play any more games with Phuket,” said Kone.

After Sunday’s match, Phuket have only two match’s remaining in the season, a home game against Bangkok FC and an away game against Chainat FC – both scheduled in early January.

“I want to thank all of our supporters who have made my time here worth it. I’ve had a really good offer from another team already and I’m still looking around,” he said, adding that a confirmation of which team he will sign with will become public knowledge after January 3.

Matijas revealed that he also has had “hard-to-resist” contract offers from teams in the Sponsor Thai Premier League as well as other Division One teams, but declined to disclose any details at this stage.

“I love Phuket and all the fans, and would really love to stay here. However, if my contract is not renewed by December 31, I will have to go,” he said.

He added that other foreign team mates, Nigerien Boubacar Issoufou and Ivorian and Coulibaly Abdoul – on loan from Muang Thong United – are also unsure of their direction next season.

The fifth foreign player, Nenebi Tre Sylvestre, from the Ivory Coast, told the Phuket Gazette that he is also unsure of his future after next season.

“My contract ends at the end of the season, and I don’t know anything yet,” he said.

Some fans are taking the news hard as can be seen by the tone of comments on the fan club wall.

“When will competent management ever come to save us in Phuket?” read another.

Kick off for Sunday’s match against 11th placed, relegation-threatened Air Force United will be at 6pm.