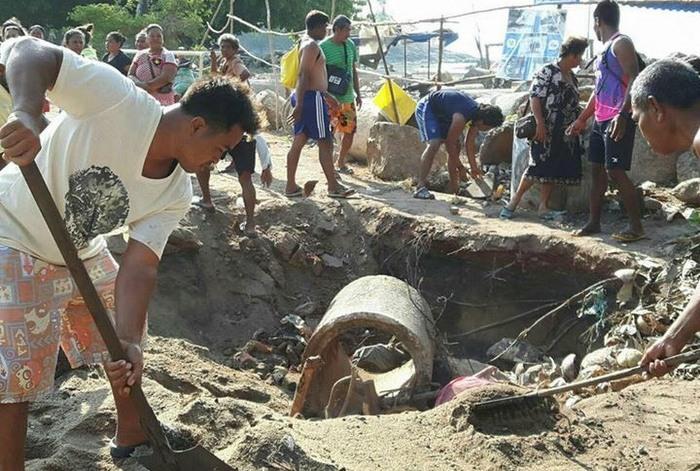 PHUKET: Police and military officers rushed to Rawai this morning to prevent a violent clash between private investors and local sea gypsies in a beachfront property dispute.

“Men hired by Baron World Trade Co had gone to the disputed plot to start developing the property, but locals were trying to stop them – filling up holes that were being dug,” explained Rawai Mayor Aroon Solos.

Mr Aroon confirmed that no one was injured in the incident.

However, in January, more than 30 people were injured during a violent confrontation between the two groups (story here).

The dispute over the land arose when Baron World Trade Co attempted to develop a section of the 19rai of beachfront land for which they hold Chanote titles. However, the pathway used by the sea gypsies to access a sacred site situated on the property, runs directly through the area that the private investors are attempting to build on.

The sea gypsies are fighting a number of court cases for alleged encroachment in their attempt to establish their claim to plots that are owned by several investors. At the core of their case are DNA tests on skeletal remains unearthed at the sea gypsy village that confirm that seafaring nomads have used Phuket’s southern beachfront for more than 100 years (story here).

Leaders of the nomadic people turned down the provincial government’s idea of purchasing the disputed land from the investors and putting it aside for the sea gypsies use.

“It is clear that the land is ours and we have a rightful claim to it, so we do not agree with the province’s proposal to buy the land,” mentioned community leader Ngeem Damrongkaset (story here).