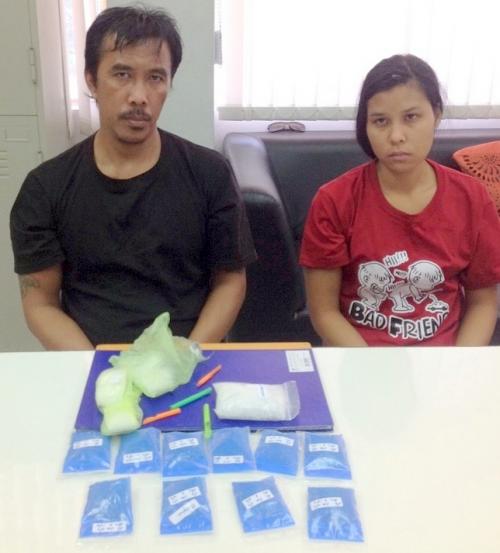 PHUKET: Phuket City police yesterday made two arrests and seized more than 2,000 pills of ya bah (methamphetamine) and 102.29 grams of ya ice (crystal methamphetamine) after staking out a Phuket Town fire hydrant.

Acting on a tip-off from an informant, officers took up positions surrounding a fire hydrant in Soi Kamnan in Phuket Town, and waited for suspicious activity.

“We moved in and arrested Sompol Sunthornkij, 42, and Saowanee Puengpong, 29, after we found them with 600 ya bah pills and 100.29 grams of ya ice packed in a large plastic bag,” Phuket City Police chief Sermphan Sirikong told the Phuket Gazette.

“They were placing the bag next to the fire hydrant, waiting for the buyers to come and take it,” he said.

The officers then searched the couple’s house in Soi Palian, in Rassada, where they found 1,411 more ya bah pills, Col Sermphan explained.

“Police seized the drugs and their black Honda motorcycle. Both suspects were charged with the possession, sale and distribution of a class 1 narcotic,” he added.