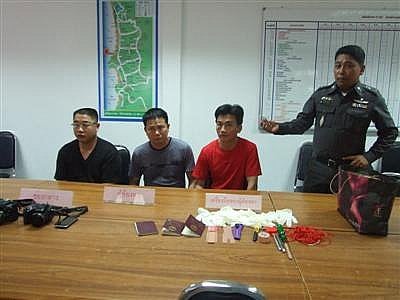 PHUKET: Chalong Police have arrested three mainland Chinese they think are part of a gang who specialize in burglarizing guests at luxury hotels the world over.

The three were arrested as they were leaving the grounds of the Karon Sea Sands Resort and Spa yesterday.

They tried to flee on foot, but were run down by police, officers said.

A fourth member of the gang got away and remains at large, however.

A search of the room and luggage uncovered two cameras, a mobile phone and equipment such as box cutters, rubber gloves and string allegedly used to break into the rooms of unsuspecting tourists.

The arrests followed a spate of hotel room break-ins all over the island, Lt Col Narong said.

The men confessed to the break-ins only after being shown CCTV footage catching them in the act, he said.

“They posed as tourists, staying just one night at hotels to break into other guest rooms. They initially denied all charges, but confessed after viewing the CCTV images,” he said.

Hotel owners came forward to positively identify the suspects, confirming that some of the recovered items belonged to their guests.

Phuket Immigration said the four arrived in a group of eight, which then apparently divided into two teams of four each, Lt Col Narong said.

“They refused to show how they got into the hotel rooms, but the footage shows they gained access easily. I am still amazed at how they could get in using just a small piece string and sheet of plastic,” he said.

“This team was responsible for breaking and entering as well as theft. The other team of four would receive the stolen goods and sell them or smuggle them out of the country,” he said.

The system made it difficult to recover stolen goods needed as evidence, he said.

“This allowed the gang to operate in many countries without fear of arrest,” he added.

Initial charges against the men include breaking and entry, theft, and trespassing by day and night.

“The three did not provide much information about the escapee, but we will track him down,” Lt Col Narong said.

“I would like to warn hotel owners to keep an eye out for groups of Chinese tourists that book a single room for one night,” he said.

“It is suspicious behavior because foreign tourists travelling in groups in Phuket usually stay more than a single night,” he said.

Luangta Maha Bua remains in Phuket, in spirit and reality