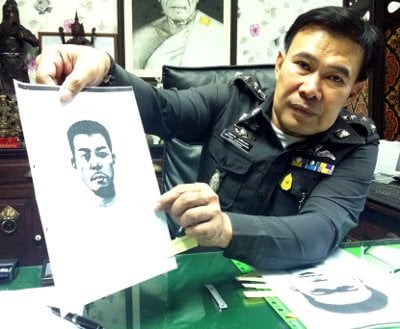 PHUKET: Phuket police today announced a 50,000-baht reward for information that leads to the arrest of the man who robbed a Siam Commercial Bank money exchange booth near Karon Circle on Saturday night.

Chalong Police Superintendent Krittapad Dej-intorrasorn today also released a composite sketch of the wanted man, drawn from descriptions by witnesses, in hopes that it will assist in his capture.

He escaped with mixed currencies, including US dollars and euros, with a combined value of 1,752,500 baht, Col Krittapad said.

“Anyone who sees a man matching the description of the suspect is urged to call us any time of the day at 085-300 0060,” said Col Krittapad.

Meanwhile, Chalong Police have set up four teams of officers to track down the robber, he added.

“I have split my team into four groups to search for him. The sketch was compiled from CCTV camera images and descriptions from witnesses, so this should easily lead us to the robber,” Col Krittapad said.

“I have contacted the investigation team at Phuket City Police and Provincial Police Region 8 [headquarters, based in Surat Thani] to help us search for him.

“I am quite confident that we will get this guy soon,” he added.