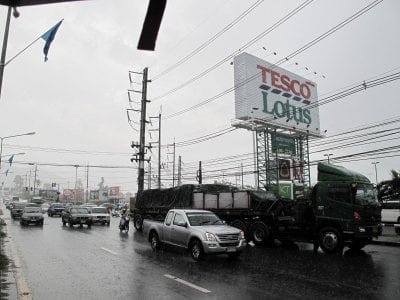 PHUKET: Police have identified the victim of yesterday’s horror smash at Tesco-Lotus junction as Miss Orrasa Pethpattana, a 19-year-old native of Nakhon Thai District in Pitsanuloke.

Case investigator Capt Kittiphum Tinthalang of the Phuket Provincial Police told the Gazette Miss Orrasa was riding riding pillion on the motorbike driven by her boyfriend, 27-year-old Yutthapong Deepakdee, when they were hit by the 22-wheel flatbed truck and trailer rig.

The crushed helmet found at the scene belonged to a third victim, 40-year-old Wannasong Chamnan, who suffered only light injuries to the back of his hand.

He was taken to Vachira Phuket Hospital for treatment along with Mr Yutthapong, who was admitted for treatment of a broken leg and other injuries.

Mr Yutthapong is an employee of the Patong Merlin Hotel.

The truck driver, 33-year-old Pongtorn Phutong, told Phuket City Police that he saw the yellow light as he approached the intersection and tried to stop.

However, the brakes failed and he lost control of the rig, which was fully laden with ceramic tiles. He did not attempt to flee the scene, Capt Kittphum said.

He is now in custody and awaiting charges by police, who are continuing their investigation today.