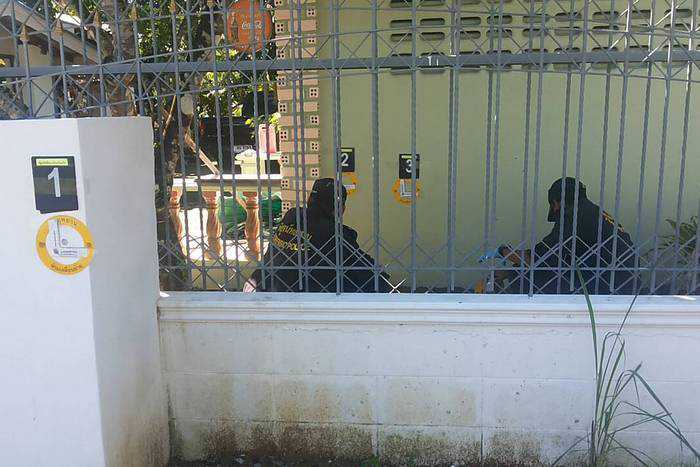 Vuthisak Pungsombut, 19, was driving a motorbike with his coworker Pongsak Sukjam, 44, riding pillion, back to the workers’ camp where they live after watching a football match at a nearby shop in Srisoonthorn, Lt Col Amnuay Kraiwutanan of the Thalang Police told the Phuket Gazette.

“Two men on another motorbike started following Mr Vuthisak and Mr Pongsak on their way home,” he said.

“While they were driving on Baan Suan Niramit Soi 3, the two suspects pulled up next to them. The suspect on the back of the motorbike shot at the men, hitting Mr Vuthisak in the chest and causing the motorbike to fall over.”

Mr Pongsak told police that he and Mr Vuthisak, who was critically injured, ran in separate directions after the attack to avoid being attacked again.

“Mr Vuthisak ran into a banana-tree plantation and Mr Pongsak ran off to get help from his parents, who live nearby,” said Col Amnuay.

Mr Pongsak and his parents rushed back to the scene in a pick-up truck to find Mr Vuthisak and rush him to hospital.

Yesterday, at about 10am, police returned to the scene of the shooting and found the bases of several spent cartridges on the ground and three holes in the wall of a nearby house.

Mr Pongsak said he did not know why the two suspects attacked them. However, police are continuing to investigate the incident and search for the suspects.

Down at the dojo: Phuket martial arts club finds a new home