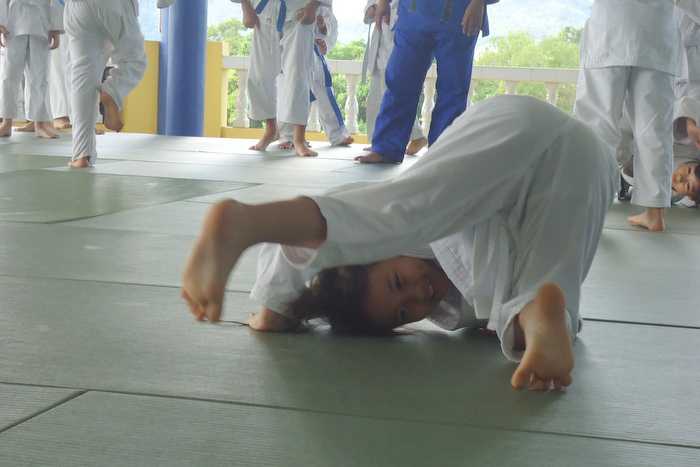 PHUKET: The Phuket Martial Arts & Buerki Judo Club group has found a new home at the FunStart Family Sports and Leisure Club, and is calling on the island’s youngsters to put down the video games and pick up the powerful martial arts of judo, jujitsu, aikido and aikijitsu.

The judo club has been established on the island for years, but has always been on the move, says Stefan Klimsch, a parent who is deeply involved in the club and who also trains at the center.

Now, with its new home, the club has a fully-functional and spacious training area, and organizers would like to welcome even more students to its rapidly expanding family.

With about 15 students in the adult and competitive judo classes and about 14 children of ages 5 through 11 in the kid’s judo class, the club is ready to add more classes and more forms of martial arts to its already impressive repertoire.

“We offer judo as a martial art for kids, and on a competitive level for adults – because our club competes at a national level. We also offer jujitsu and aikijitsu and aikido, because people have different interests,” Stefan explains.

The non-competitive and kids’ courses offered are not based on weight or age, nor are they based on gender. There are as many boys as there are girls, and there are all different skill levels in the club.

“Every week… one or two people come who have never done any martial arts before, and they are softly integrated into the program,” Stefan explains.

“We always have one trainer and his or her assistants. They take care of those who are new, or relatively new. The main teacher is focused on the general movement in class.”

Stefan praises HeadStart for their generosity in allowing the club to re-establish at their sport facility in Kathu, and says that the school and the club are on the same page when it comes to keeping kids active.

“We know that on the island of Phuket, there is something missing,” says Stefan.

“Kids need something to do [after school] other than play video games, and it cannot just be soccer. Soccer is good, but not everyone wants to play it. We are trying to enrich the basic after-school program on this island.

Not only does the club now have the ideal setting for classes, but it also boasts two expert instructors of the highest caliber to train its students: Sensei Chone and Sensei Pedro Guiterrez Mesa.

Running the Phuket Martial Arts & Buerki Judo Club group is Sensei Chone, the principal judo and jujitsu trainer for both the adult and competitive classes during the week and kids classes on the weekend.

Sensi Chone believes there is much to be gained from the arts of judo and jujitsu, especially for kids.

“They learn discipline. They learn how to control their minds, and how to protect themselves if they are falling, or if someone is trying to hurt them,” he says.

“For some kids, when they first start practicing judo, they are shy and walk in like a hunchback without making eye contact. After three months, though, they walk upright and have self-confidence.”

Bringing an unprecedented level of expertise to the island is Sensei Pedro, the aikido and aikijitsu instructor, who trained alongside the son and grandson of the founder of aikido Morihei Uyeshiba in Japan earlier this year.

Along with teaching basic aikido and aikijitsu classes during the week, Pedro instructs 35 security guards from a popular Patong discotheque the art of self-defence and restraint, so they can remove unruly customers from the club without inflicting injury.

“The owners of the bar don’t want people to fight. They don’t want blood. Now, the security guards don’t fight back. They take people out without a fight,” says Sensei Pedro.

“They need only 10 seconds – they work like a team. When somebody starts a fight [with a guard], the other guards help him. If they have a problem [in the club], they use my techniques.”

So what’s next on the roster after the aikijitsu, aikido and self-defence training classes for security guards take off? Self-defence for women, say the instructors.

With the newly re-established Phuket Martial Arts & Buerki Judo Club group kicking off, islanders of all ages, shapes and sizes can join the club and find their perfect martial art, as well as a fun, healthy and unique way to learn valuable life and safety skills.

The Phuket Martial Arts & Buerki Judo Club group holds classes every day of the week, with the latest addition being aikido / aikijitsu on Tuesdays and Fridays, and kids classes on Saturdays and Sundays. For more information about the club and to find out which classes are offered at what times, email phuketmartialarts@gmail.com.