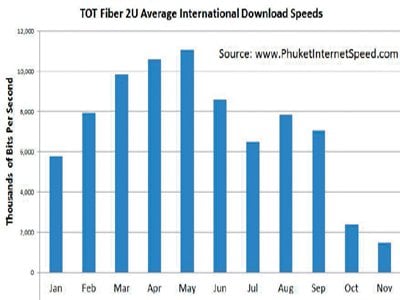 PHUKET: A couple of years ago, TOT unveiled its Fiber 2U service in a gala presentation at Royal Phuket Marina, replete with pounding music and dancing girls – sure signs of technological superiority.

At the time, the service didn’t work very well. It went down for long periods of time, with all sorts of stalls and glitches. And it cost a fortune- two fortunes. But we were assured it was the fastest thing since greased lightning, with advertised speeds up to 100,000Kbps. That’s as fast as a typical line in Hong Kong. Imagine.

The service stabilized and it was blindingly fast. Really. So fast that we had to change the program we used to measure speeds. Fiber 2U blew up the gaudy flash speed test, and we had to revert to bare-bones Java. We were seeing international download speeds of 7,000Kbps – even 10,000Kbps or more. And it wasn’t just one line – many people were getting great speeds. It was by far the fastest internet this island’s ever seen.

About six months ago, TOT lowered its prices on Fiber 2U and more people signed up. The entry-level Fiber 2U 10/1Mbps line went down to 1,490 baht per month. The corporate line with one fixed IP address went to 5,290 baht per month. Speeds teetered a little bit – you can see it in the graph. Still, most people were seeing international download speeds between 6,000 and 8,000Kbps, which is fast enough to stream high-definition video.

But about two months ago, all of that went to Hades in a festooned handbasket. It’s as if somebody turned off the light. Now, Fiber 2U customers are more likely to report international download speeds in the 1,000 to 1,500Kbps area – and some come in at 500Kbps or less. That’s about the same speed as a 599-baht-per month 3BB line.

How the mighty have fallen.

I’m not just talking about the cheapest line, although we have more reports from the Fiber 2U 10/1Mbps line than the others. We’re seeing speeds dropping on the 2,420 baht Fiber 2U 20/1Mbps line, as well as the corporate service. A few people are still getting occasional runs back at the old levels, but for almost all of the TOT customers, almost all of the time, the fiber- optic line runs about as fast as an AIS or TrueMove-H wireless account – at three times the cost. Believe me, that’s saying something. What happened?

I don’t know. What I do know is that it had nothing to do with the floods – the downward trend started long before rain started falling up North. It has nothing to do with high season – the drop came while there were very few tourists in Phuket. It isn’t kids playing games in the afternoon or business demand, or a huge influx of customers. How do I know? Because the speeds are just generally lousy, 24 hours a day, seven days a week.

Far more likely is that somebody at TOT decided to spend less on international bandwidth for Fiber 2U customers. It’s also possible that someone accidentally hooked up Phuket’s fiber customers to a slower international line. It’s even possible that somebody accidentally mis-routed Phuket’s fiber through the wrong switches in Bangrak, the TOT switching center.

According to the people I’ve talked to, TOT has fielded lots and lots of angry complaints. Surprisingly, the people I know who have complained say that the TOT staff has treated them well and worked hard to make their lines better. Sometimes they see improvements for a while, frequently they don’t.

When TOT gets a persistent complaint, the most common reaction is to replace the router. TOT’s standard router is a Welltech WG-332S, which isn’t even listed on the Welltech web site. Those who complain get a Mikrotik router, which apparently works better – for a while.

What does this all mean for somebody who just wants a fast, reliable internet connection? It means, once again, that the amount you pay for internet probably doesn’t correlate at all to the quality or speed of the connection. TOT Fiber 2U is still a reasonable choice, but you can probably find faster speeds for less money. Watch PhuketInternetSpeed.com to see what people are getting.
Have a fiber line and want to keep it? One company in Phuket has a great deal of experience installing, tuning and maintaining fiber systems: Phuket Data Wizards

If you aren’t yet posting your international download speeds on PhuketInternetSpeed.com, I hope this column gives you an idea of why it’s more important than ever to keep everybody in Phuket apprised of how your internet connection is working. Even if you have a simple 3BB 6Mbps line, you’re helping yourself – and everybody else – by regularly testing and posting your results. It takes less than a minute. Drop by the speed reporting site and sign up. If you have problems – forgot your logon ID or password, or you can’t get it to work – drop me a line. It’s free, fast and easy, and the connection you save may be your own.

Live Wire is Phuket Gazette columnist Woody Leonhard’s weekly snapshot of all things internet in Phuket. Follow him on Twitter: @PhuketLiveWire; “like” his page at facebook.com/SandwichShoppe; or visit his free Sunday morning computer clinics at Woody’s Sandwich Shoppes.