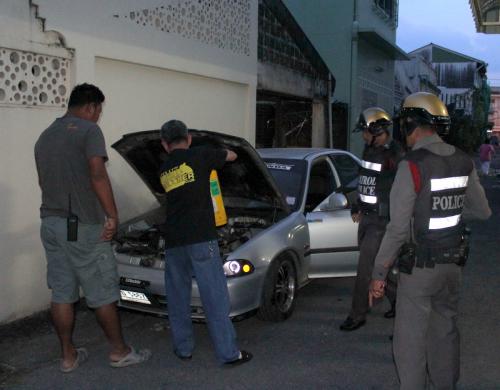 Officers pursued the suspects’ silver Honda Civic until the driver took a sharp turn into Soi Nimit 1 in Phuket Town and crashed into the side of a house. The men managed to escape the vehicle after an engine fire erupted, explained Lt Wetchasak Juladung of the Phuket City Police.

“The two men fled the scene. We attempted to run them down, but were unable to find them,” Lt Wetchasak said.

It took local residents 10-20 minutes to control the flames with fire extinguishers.

Inside the vehicle, police recovered a letter from a woman in Phuket Prison, a list of names that they suspect are drug clients, a 9mm handgun, 20 bullets, three beers, ID cards, an ATM card and a plastic bear full of cash.

“We are now searching for the people identified on the cards. However, at this time we are not ready to reveal their names,” Lt Wetchasak said.