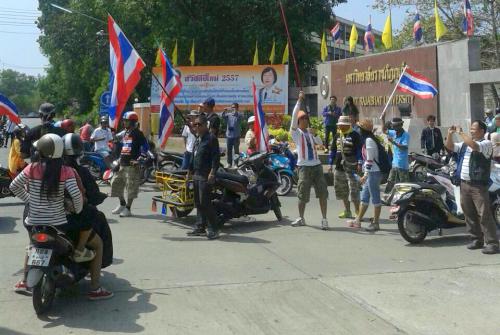 PHUKET: Phuket anti-government protesters are on the move to close every government office in the province today.

“We will spend the whole day closing every government office by covering their sign with a black cotton sheet,” Phuket protest co-ordinator Amnuay Kumban said.

The Phuket Gazette has learned that in addition to Phuket Provincial Hall, the Phuket Employment Office, which issues work permits to foreigners, has closed.

“We are asking for their cooperation to not work for the Thaksin regime and to pressure the prime minister [Yingluck Shinawatra] to resign from office,” Mr Amnuay said.

Protesters arrived at the Phuket office of the state-run National Broadcasting Services of Thailand, better know as NBT or “Channel 11 television”, at about 11:30am.

“They chanted slogans for about 30 minutes,” one Phuket NBT staffer told the Gazette.

“We closed our office, but they soon left. We have now re-opened.”

“At this stage, we have no idea how long the offices will be closed,” Mr Amnuay said. “We are waiting for more instructions from Bangkok.”

Phuket protesters to give Bangkok Shutdown victim a hero’s return