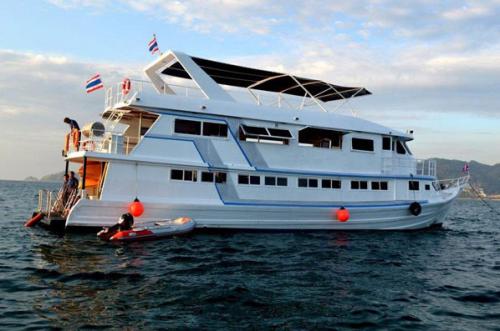 The mooring punched a hole in the hull of the Phuket motor yacht as it was returning from Coral Island with 32 tourists on board, explained Australian boat owner “Sando”, who declined to be named in full.

“It was about 4:30pm, coming up to low tide, when we hit the mooring. We were coming back from a trip with Australians, New Zealanders, Americans and Thais – who all took part in a Muay Thai fitness training session,” Sando told the Phuket Gazette.

The Lady Andaman made it to Chalong Pier, but was taking on so much water that even three pumps could not keep the boat afloat.

“The speedboats were tearing past, ignoring the speed limit and making huge waves, which made it very difficult for the people trying to fix the hull,” Sando said.

“Now the boat is sunk. It’s a write-off. We’ve been waiting all day for the insurance agent to call us back. Ten phone calls later, we still haven’t heard from them.

“We have to move the boat; the longer the boat sits on the bottom, the more damage is done.”

“The boat had a full refit, two new engines, and was repainted. Now I wish I hadn’t spent the money,” Sando said.

“I had a charter coming up for a 2mn-baht Muay Thai fitness training competition. Now I have to cancel it. I have a deep sea fishing boat in Ranong [about 360km north of Phuket], but I don’t have another charter boat.”