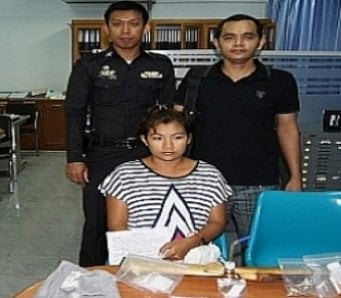 PHUKET: Police yesterday arrested the young wife of a Phuket Airport taxi driver, catching the woman with a stash of ya bah (methamphetamine) pills and a firearm in the family home where she was caring for her three young children.

Police obtained a warrant to search the couple’s home after investigation revealed the suspect and her husband, 29-year-old Anusorn “Noi” Petcharat, were supplying drugs to local youth near the airport.

Police arrived at the home at 7am, but Mr Anusorn had already left for work.

A search uncovered 382 ya bah pills stashed inside the pockets of some garments inside the home.

Drug-taking paraphernalia, an unlicensed .22 caliber gun, and 10 bullets were also seized as evidence.

Ms Sukhon told police all of the items belonged to her husband.

Police asked the suspect to arrange a meeting with her husband, who was apparently tipped off about the raid. He remains at large.

Thachatchai Police said they will apply for an arrest warrant for Mr Anusorn as soon as possible. They believe he is still somewhere on the island.

In an unrelated case yesterday, Kamala Police successfully conducted a sting operation to arrest a man who was allegedly supplying local youth with ya ice (crystal methamphetamine).

Police informants arranged a deal to buy some of the powerful stimulant from 28-year-old Akkaradet “Sam” Koesumpan of Nakhon Sri Thammarat.

Mr Akkaradet arrived in Phuket aboard a bus from Nakhon Sri Thammarat with the intention of meeting the informant in Kamala at 9pm.

He alighted at the Heroines’ Monument and called the informant, asking to be picked up because he didn’t know the way to Kamala.

Shortly thereafter, a tuk-tuk arrived at the designated meeting point and Akkaradet got in, totally unaware that the driver was none other than Captain Narong Buakon of the Kamala Police.

Capt Narong drove the suspect back to Kamala and then at 10pm pulled into the Na Nok police checkpoint, where he identified himself as a police officer and searched the suspect with fellow officers.

Both cash and contraband were seized as evidence in the case.

Mr Akkaradet confessed to charges of possession of a Category 1 restricted narcotic with intent to supply.