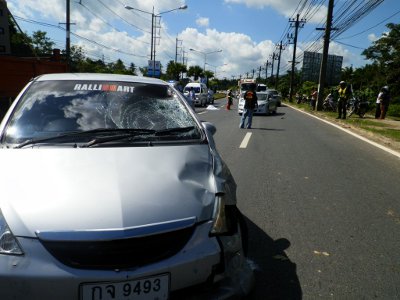 PHUKET: A rear-end collision spun a car out of control on Thepkrasattri Road in Koh Kaew yesterday morning, causing the car to slam into a motorbike, killing the rider.

Thalang Police duty officer Patiwat Yodkwan was notified of the accident at 9:15am.

“Ms Amanee’s relatives told us she worked at a local laundry. She had just picked up some laundry from the Yee Teng house, which she normally did as part of her job,” said Capt Patiwat.

Anirut Ubonkaew, 33, told police he was driving his Honda City car northbound from Phuket Town to the airport when his car was struck hard from behind by a pickup truck with a converted refrigerator unit on the back.

“He said the truck slammed hard into the back of his car, causing him to lose control of his vehicle, and he hit Ms Amanee’s motorbike,” Capt Patiwat told the Phuket Gazette.

All three vehicles were at the scene when police arrived, together causing a long tailback on the busy road.

“Both drivers have been taken to Thalang Police Station for further questioning,” Capt Patiwat added.