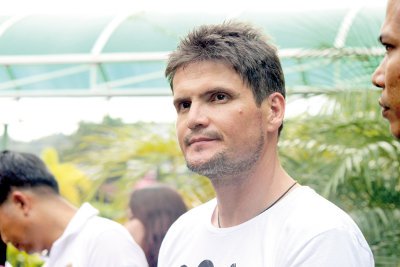 PHUKET: Police have sent a missive to Interpol to confirm whether or not three foreigners arrested for the theft of 30 million baht in gems and jewelry on Monday are wanted international felons.

The move to check with the international law coordination agency follows police seizing as evidence a notebook containing a handwritten list of dates, events and venues of upcoming gem and jewelry trade shows in a variety of countries, including Australia, Singapore, Malaysia, India, Dubai, Bahrain and Japan.

The book contained handwritten notes detailing the TFWA Asia Pacific event in Singapore, marked to be held May 13-17, the Asia Jewels Fair in Bangalore, to be held on June 8-10, followed by an event at the Brisbane Exhibition & Convention Center in Australia, slated for June 9-11.

The Hyderabad Jewellery Fair, scheduled to be held at the Hitex Convention Center in Hyderabad on those dates, is touted as the largest gem and jewelry fair in South India.

According to HJF organizers, last year’s event attracted more than 140 commercial buyers and sellers of diamonds, sapphires, rubies and other precious stones, fitted to jewelry or loose.

“We found the book with the list of upcoming gem and jewelry trade shows in the possession of the Mexican woman Mejia Asseneth,” Maj Gen Chonasit said.

Police arrested 57-year-old Mejia Zuluaga Maria Asseneth along with fellow Mexican national Ruben Dario Zapata Gonzalez, 40, Roslina Binti Abu Bakar, 42, from Malaysia, as well as Turkish national Riza Balkan, 49, in Trang province after the car they were travelling in failed to stop at a police checkpoint.

Trang Highway Police gave chase and forced the car to stop. Inside the car, officers found most of the stolen jewelry.

However, about 173 items with a total value of about 5mn baht is still missing.

Ms Asseneth managed to flee the scene after her initial arrest.

Police believe her to be central to the robbery and she remains at large. She may be heading south to Thailand’s border with Malaysia, said Maj Gen Chonasit.

A warrant for her arrest has been issued, he confirmed.

Police Commander Chonasit said he believed the gang were an “international crew” who were assembled expressly for committing gem heists, first in Thailand and then elsewhere around the world.

“I believe they are part of an international gang. These people met on the internet first and then met for the first time in person here in Thailand,” Maj Gen Chonasit said.

Police were continuing their search for Ms Asseneth and for the missing 5mn baht in gems and jewelry.

Mr Balkan is being detained by police in Trang province, where he was initially arrested, on a drugs possession charge. Col Chonasit has confirmed Mr Balkan must face the drugs charge there first before being transferred to Phuket to face charges related to the gem theft.