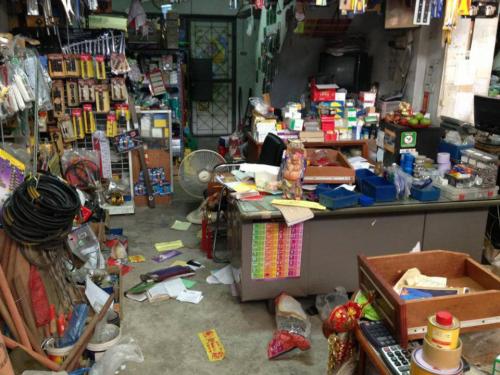 PHUKET: Police are on the lookout for the suspects who stole 12 kegs of beer, two cartons of cigarettes and 10 bottles of whisky from a liquor store in Baan Lipon, in Phuket’s northern district of Thalang.

They even stole the store’s pickup truck to make off with the party essentials, reported police.

So far, officers are stumped for clues.

“We have checked the CCTV footage from a business across the road and questioned neighbors, but we have yet to develop any strong leads,” said Maj Kittiphum Tinthalang of the Thalang Police.

“All we could see on the CCTV was the pickup truck leaving the store, heading south,” he said.

Officers were alerted to the robbery at 8:30am on Tuesday, when shop owner Sangjan Thepnarong, 33, arrived at the shop to find the lock broken and her store in disarray.

The contents of drawers and other items were strewn across the floor.

Whether or not the suspected revellers were looking for cash or a bottle opener, police could not say.

“The thief, or thieves, also broke into the construction supply store next door, but it seems nothing was stolen from there,” Maj Kittiphum explained.

“We have yet to identify the suspects. They could be anyone – people who live nearby or even customers. We are still investigating how many people took part in the crime,” he added.

“Considering what they stole, we believe they want to party,” he said.

Officers are continuing their search for the suspects and the stolen goods.

“We are continuing to question neighbors and collect more evidence. Hopefully, we’ll have the culprits in hand soon,” he said.