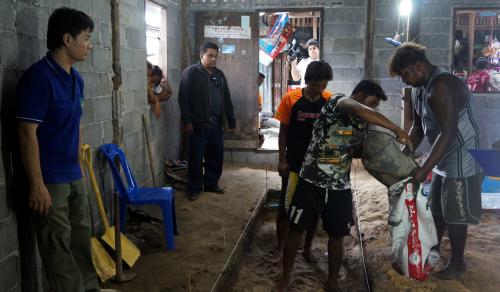 PHUKET: Department of Special Investigation (DSI) officers have found human bones in the sea gypsy settlement in Rawai that may help bolster the gypsies’ claim to have lived on the land for generations.

The DNA in the bones – parts of a skull, arm, leg and chest – will be compared with the DNA of the current gypsy residents, explained Prawuth Wongsinil, chief of the DSI’s Consumer and Environment Protection Office.

The dig started on August 20 and focused on three locations at sea gypsy homes. No bones were found at the first two locations.

“We had dug only about 20 centimeters on the third site when we found the first piece of human bone,” explained Thawatchai Chanpaisalsilp, a specialist from the Fine Arts Department Phuket office.

“We believe all the fragments came from the same person,” he said.

The bones, which were damaged by house construction and water-pipe installation, have been transferred to the Central Institute of Forensic Science for examination.

Col Prawuth earlier told the Phuket Gazette that if human bones were found, he would pose a question to the investors who claim the land is theirs: If it is, why did they allow the sea gypsies to bury their dead there?