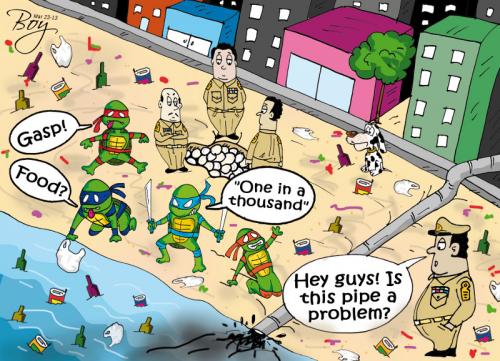 PHUKET: It would be difficult to find a more depressing issue than the plight of the various sea turtle species that face extinction in local waters, some of which are also at risk of disappearing from the planet completely (story here).

Sea turtles are an integral, but fast disappearing, part of Phuket’s natural heritage. Older generations of Thais will remember the numerous Thai films that featured footage of huge female leatherback sea turtles lumbering ashore to nest on the island’s west coast beaches, making Phuket’s name virtually synonymous across the nation with these ancient and amazing creatures.

Fast forward a few decades to 2013, when virtually any sea turtle nesting on a Phuket beach, regardless of the species, is considered newsworthy. The simple truth is that the island’s beaches – and offshore waters – render existence for these reptiles almost impossible.

This comes despite the fact that most sea turtle species far predate mankind and have a remarkable reproductive strategy that factors in huge losses of hatchlings to an array of predators, including sea birds, canines and – it goes without saying – man.

The leatherback in particular dates back some 110 million years, according to fossil records. This evolutionary staying power indicates a well-honed biological design, provided that its natural habitat is not compromised – but it is.

We are all, each and every one of us, culpable for all of the plastic garbage that finds its way into the sea and ends up killing these animals, which mistakenly take the rubbish as their natural prey. But ingestion of improperly discarded plastic is only one of the threats these creatures face.

Another factor in their demise is unsustainable commercial fishing practices, such as the use of drift gill nets, which can entangle sea turtles or deprive them of their natural prey. Thailand, despite being a party to various accords aimed at protecting sea turtles, is notoriously bad at protecting them and is abashedly engaged in the rape of the seas in general, including inside its territorial waters and even marine national parks.

Thai fishing fleets typically consist of desperately poor migrants whose day-to-day struggle to survive seems to preclude the luxury of consideration for other forms of living beings. The Thai captains of these vessels need an overwhelming intervention and change of outlook if there can be any hope for sea turtles in our waters.

Sadly, we live on an island where even the most common-sense laws, such as the illegality of driving on the wrong side of the road, are brazenly flouted.

It is hard to find any hope on the sea turtle issue, and it will be even sadder if indeed these ancient creatures do go extinct in our lifetimes. But we will be left with only ourselves to blame.