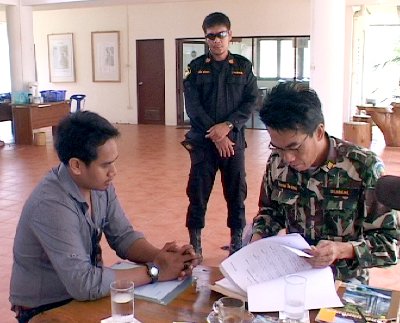 PHUKET: A community of farmers living on a road leading into Sirinath Marine National Park, on Phuket’s west coast, have appealed for the road and power supply to their village not be cut off following a police complaint being filed against a nearby villa project for encroaching on national park land.

“The villagers have been living on Layan Soi 7 for 30 to 40 years. People who live here use this street to transport rubber, vegetables and fruit that they grow. Demolishing the road and pulling down the power poles would affect us,” explained Mr Jaroon.

“There are about 20 families living along that road and about 30 rubber plantation operators in the area. We are afraid that we will have no electricity and no direct access to our village,” he added.

The villagers live on the same road that leads to one of the developments under investigation for encroaching on Sirinath National Park.

“We will have to see how the case goes. If the court orders that everything built illegally on state land is to be removed, we will have no choice but to follow the order,” said Mr Cheewapap.

“However, I don’t want the villagers to worry too much about it. By law, roads and power poles meant for public use can be on national park or public land, but permission must be granted from the national park first,” he explained.