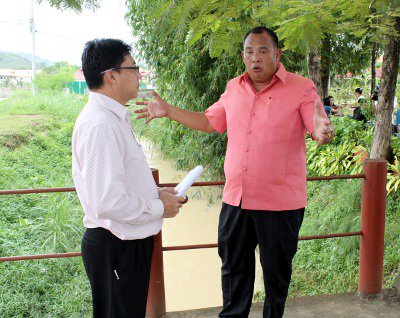 PHUKET: The Chalong Municipality has requested 300 million baht in funding from the Royal Irrigation Department for a permanent flood-prevention system after last month’s floods again highlighted the issue of flash flooding in Phuket.

The project proposes the construction of retaining walls along all canals in the Chalong area to prevent debris and soil from clogging and disrupting the water flow, which was cited as one of the causes of the recent flooding.

“The Chalong area usually floods after heavy rain, partly due to the narrowing of canals by soil slipping into the water and people throwing rubbish into them,” said Chalong Mayor Samran Jindaphol.

The municipality has already budgeted 20 million baht for the dredging of canals in the 2013 fiscal year, he said.

“There are many canals in the Chalong area that allow surface water to be diverted directly out to the ocean. The main two are Klong Bang Kata and Klong Thanon Chao Fa. We have already dredged those two canals and are now planning to work on the rest in the Chalong area,” he explained.

In addition to the building retaining walls, the Chalong Municipality is planning on building a 15-million-baht water gate, which, it is hoped, will solve the flooding problems near Ladthi Wanaram Temple (Wat Tai) on Chao Fa East Road.