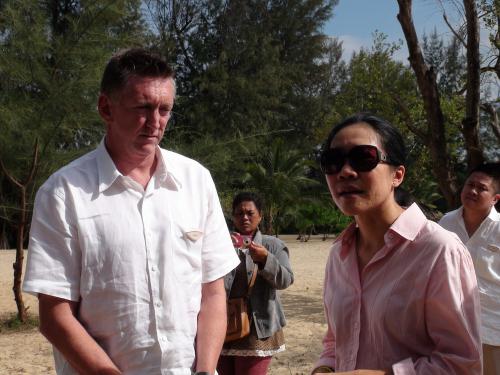 PHUKET: Officers vowed to continue their investigation into a luxury resort that allegedly cleared swaths of sea morning glory from the beach as part of a beautification project, although the hotel has already replaced the plants.

“We will not withdraw the complaint against the Anantara Phuket Layan Resort & Spa, as doing so would signify that we are ignoring our duty,” Sirinath Marine National Park Chief Cheewapap Cheewatham told the Phuket Gazette today.

The plants cleared were allegedly outside of the land marked on the resort’s Chanote and part of Sirinath Marine National Park (story here).

“The resort has worked closely with the relevant authorities to ensure compliance with regards to the replanting of a small number of shrubs surrounding the property,” Anantara Phuket Layan Resort & Spa’s General Manager Boyd Barker said in a statement released after the raid.

He went on to reaffirm the resort’s commitment to the environment.

However, Mr Cheewapap said the director of the Public sector Anti-Corruption Commission (PACC) would this month be inspecting how land titles in the park had been issued.

The PACC almost a year ago quietly dropped its investigation into titles covering more than 500 rai of land in Phuket that may have been illegally issued (story here).

Mr Cheewapap was unable to confirm further details about the PACC visit to Phuket.