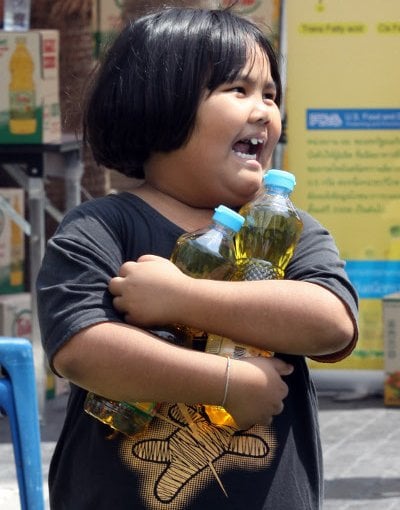 PHUKET: Shoppers in Phuket yesterday snapped up a cache of government-distributed palm cooking oil amid fears the household necessity will soon disappear from local stores.

For months now, major retailers in Phuket have been rationing sales of palm cooking oil to two bottles per person.

The Phuket CMO distributed some of the first batch of 1,000 boxes, containing 12 bottles each, in November.

The remainder was distributed to stores yesterday morning.

The bottles, with sky-blue caps and priced at 47 baht, were snapped up quickly by desperate Phuket residents, who were limited to buying two bottles per person.

The Phuket CMO also took delivery of another 1,000 boxes yesterday. The office did not announce when they would be made available, but said the new stock would be delivered to Supercheap and Phuket Grocery in Phuket Town.

“We believe the palm oil the Commerce Ministry has distributed will reduce inconvenience for consumers,” said Suphatcha Bunphalit, head of the Phuket CMO.

“We think there definitely will not be a lack of vegetable oil in Phuket because the Commerce Ministry will constantly ensure distribution of the oil in the area,” she added.

Despite being the world’s third-largest palm oil producer, Thailand has experienced a severe palm oil shortage in recent months.

The country has been forced to import hundreds of thousands of tonnes of the oil from Malaysia and Indonesia, the world’s two largest producers.

The move, agreed upon by the National Oil Palm Policy Committee, chaired by Deputy Prime Minister Suthep Thaugsuban, has led to fierce criticism.

Opposition party Pheu Thai claimed the imports were aimed at benefiting politically connected traders and would lead to hoarding and price gouging.

Party spokesman Prompong Nopparit said a politician whose first name began with “S” had been involved in keeping the commodity off the market.

One-liter bottles of government-subsidized palm oil were priced 47 baht, but some shops were selling it for 70 to 75 baht, he said.

The Department of Special Investigation yesterday launched a probe into allegations of palm oil hoarding.

The shortage is expected to ease next month, when Thailand’s next palm oil harvest begins.