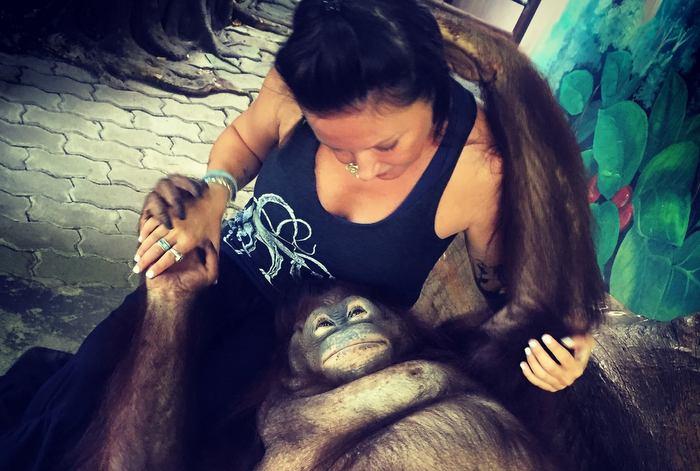 PHUKET: A 13-year-old orangutan that conservationists were fighting to free from Phuket Zoo has gone missing, confirmed Wildlife Friends of Thailand (WFFT).

“Natural Resources and Environmental Crime Division (NRECD) of the Royal Thai Police and Department of National Parks (DNP) agreed to investigate the case of Milo, agreeing to raid the zoo this morning,” Edwin Weik, the founder and director of WFFT, told the Phuket Gazette. “DNP regional wildlife office found that Milo was probably illegally being kept at the Phuket Zoo, as there was no orangutan legally registered at the location.”

Police officers arrived at the zoo this morning only to find that Milo was gone, said Mr Weik.

“All her photos with tourists were also removed from the zoo; they were even deleted from the Phuket Zoo’s website,” he said.

“The owner of the zoo told the group of police and witnesses that he had released Milo into the Khao Phrateaw Non-hunting area, a small patch of rain forest on Phuket. He further claimed that is were he found her two years ago.”

Pressure on the zoo about Milo began to mount after local animal-rights activist Vicki Kiely garnered more than 8,000 signatures on the online petition ‘Save Milo’ on Change.org (petition here).

“She [Milo] still has love and light in her, and deserves a far better life than the one she is living. Please sign to help us get Milo out of there,” the petition concludes in English and Thai.

Ms Kiely had been working on Milo’s case for about 6 months prior to getting enough momentum to persuade officials to raid the zoo.

“From what I know, she’s been in the zoo her whole life. She can’t survive in the wild in Phuket, or anywhere,” said Ms Kiely. “She needed to be saved from the inhuman conditions of her housing at the zoo, but not like this.”

At this point, the last publicly confirmed date of Milo’s presence at the zoo is an Instagram photo of Milo with a tourist. The photo was taken on February 15.

Today, Ms Kiely drove to the Phang Nga Wildlife Reserve, as well as the Gibbon Rehabilitation Project in Phuket in hopes of finding Milo.

“They said that they have not seen her at all, but they will keep an eye out for her,” said Ms Kiely

DNP officers have been ordered to track down Milo, confirmed Metee Meechai, director of the DNP Region 5.

“Orangutans are protected under the Convention on International Trade in Endangered Species of Wild Fauna and Flora (CITES). We have officers investigating this case,” said Mr Metee.

The Phuket Gazette contacted the Phuket Zoo. However, employees declined to comment and denied having contact information for the zoo manger.

“We are now doing all we can to locate and rescue Milo,” Mr Weik said.

The case of Milo is not the first of illegally smuggled and exploited orangutans on Phuket, reported WFFT in it’s statement titled: Milo the Orangutan is Gone!

A group of smuggled orangutans were returned from Thailand to Indonesia in 2015 following years of diplomatic wrangling over who will care for them after the majority were discovered abandoned on a roadside (story here).

“12 orangutans were found in another sub-standard zoo on the island in 2008, and after many months of campaigning, the orangutans disappeared only to be found in cages on the highway between Phuket and Phang Nga Province in February 2009,” said the WFFT statement. “The owners were never charged with illegal possession or trade in endangered wildlife.”

US Embassy to hold consular outreach in Phuket