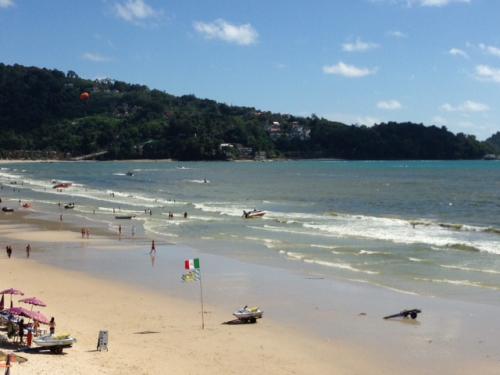 PHUKET: Patong officials are determined to discover the source of foul water being pumped into the sea at Patong Beach following a large section of dirty water surfacing at the beach yesterday.

“Our municipality was not aware of the problem. However, now that we know, we will step in to solve the problem as soon as possible,” Panida Klinbbusa, an officer of Maintenance Services department of Patong Municipality, told the Phuket Gazette.

“Municipality staff will be sent to inspect the length of Patong Beach to determine exactly where the trouble spots are,” Ms Panida said.

She explained that the municipality will not only conduct a thorough investigation, but will seek the cooperation of – and feedback from – beach guards. The authorities will also warn tourists not to swim in areas identified as being affected, for their own safety.

“We expect that the source of the polluted water is one or more hotels releasing wastewater into the bay. If this is the case, we will send warning letters to the hotel, or hotels, ordering them to fully address the problem as soon possible,” Ms Panida said.

However, one source of wastewater being released into the bay is not under suspicion.

“We can confirm the polluted water is not coming from the municipality’s wastewater treatment plant,” Ms Panida said.

“We treat all our wastewater thoroughly before harmlessly releasing it into the sea,” she explained.

“However, we now have to find exactly where the polluted water is coming from, and we will cooperate with every party related to this very serious issue, in order to solve it as soon as possible,” she said.

Patong Beach has long been plagued by wastewater treatment problems. The issue contributed to Phuket’s most popular tourist beach falling in its star ranking attributed by the Pollution Control Department Environment Division in 2006 (story here).

Lack of corrective action by officials over the years has spurred the honorary consuls on the island to express their dismay (story here), but a visiting delegation of 17 ambassadors from European nations to Phuket in June this year has placed dirty beach water back on the tourism agenda (story here).

The Gazette notes that the island’s honorary consuls are to meet with Phuket’s top officials today to discuss the most pressing issues facing expats and tourists in Phuket.