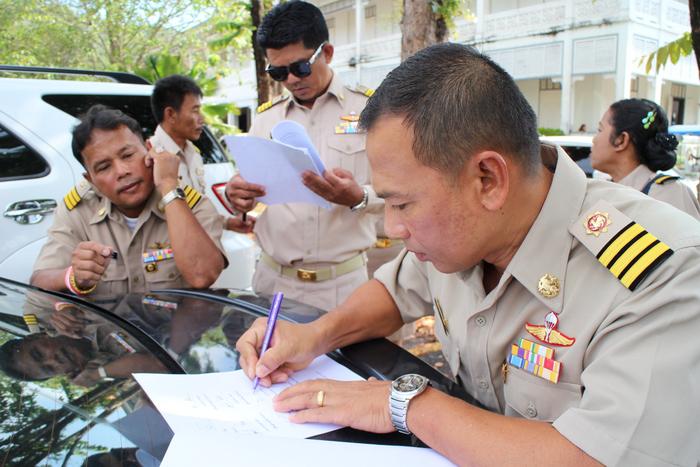 PHUKET: Kata-Karon officials yesterday threatened public protests if the lease for the Club Med resort located on 39 rai of public land along the Kata beachfront is renewed.

“For 30 years we have been waiting for the contract to expire,” said Kamnan Winai Chidchiew, who led a delegation of 10 Kata and Karon officials to file the petition at the Phuket Provincial Administration Organization (PPAO) office yesterday morning.

“We do not want the PPAO to renew the contract for the Holiday Villages (Thailand) Co, Ltd, also known as Club Med Phuket.”

“If you want us to have a public feedback hearing before we make a decision, we can do that,” Mr Chawalit said.

Kamnan Winai argued that the land could be better used for the benefit of residents.

“This land could be a beach zone for tourists and local people. We could build a public park here, or set up an exhibition that would help preserve local culture,” he said.

The lease began on September 25, 1985, and requires Holiday Village (Thailand) to pay rent and donations to the PPAO and Karon Municipality. The rent of 5,982 baht has not changed, but the amount of donations has increased incrementally over the course of the lease.

In the lease, Holiday Village (Thailand) also agreed to finance various public works, including the construction of a road, beachfront sidewalk, two parking lots, public bathrooms and changing rooms, and the purchase and remodeling of a school.

The meeting yesterday to consider the renewal of the contract was postponed, as PPAO President Paiboon Upatising was in Bangkok.

“I will consider the petition and raise your concerns in the meeting. We have to look after the interest of the majority. If they don’t want us to renew the contract, then, for sure, President Paiboon won’t do it.” Mr Chawalit said.

Celebrity comedian Teng a no show for Phuket Town