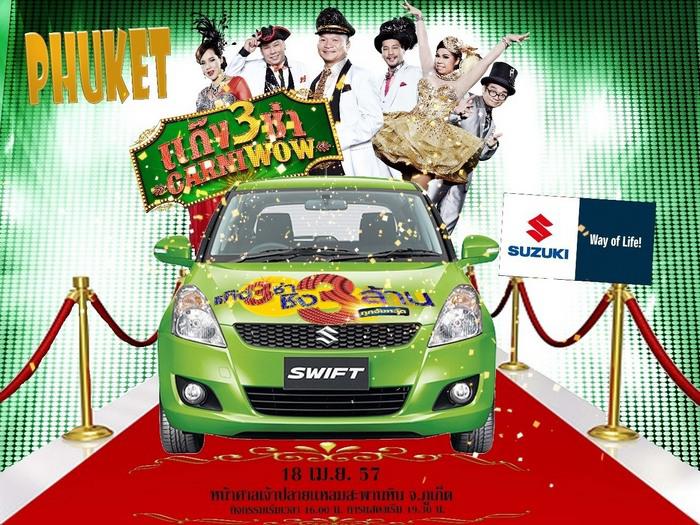 Mr Teng was set to appear in the Sam Cha Carniwow event at Saphan Hin in Phuket Town tonight.

“Event organizers from Workpoint Entertainment confirmed that Mr Teng, a popular comedian and open supporter of Thaksin Shinawatra, will not be performing with the Sam Cha Carniwow team so as to not create any conflicts in Phuket,” said Pantipa Upatising, managing director of US Suzuki Phuket, one of the event sponsors.

“Mr Teng supports Mr Thaksin, so I am glad he is not showing up. It is only Mr Teng we do not want in town; the rest of the performers are fine. However, I am not interested in attending the event.”

On January 5, anti-government protesters forced the cancellation of a Phuket Red Cross concert because Sek “Seksan Sukpimai” Loso, who supported the national election and called out for people to cast their votes, was scheduled to perform (story here).

“I am sure that people in Phuket would have really liked to see Mr Teng, but it is important to remember that his absence is only meant to prevent any possible conflict,” said Ms Pantipa.

Anyone who wishes to join in the festivities should head to Saphan Hin tonight at 4pm, when the activities begin, said Ms Pantipa. The show will start at 7:30.

“Entrance into the event is free, but tickets can be purchased for games and activities. The Sam Cha Carniwow team will also take part in the activities,” Ms Pantipa added.

After Phuket, the Sam Cha Carniwow show will travel to Krabi for a performance tomorrow night and on Sunday the show will perform in Trang.