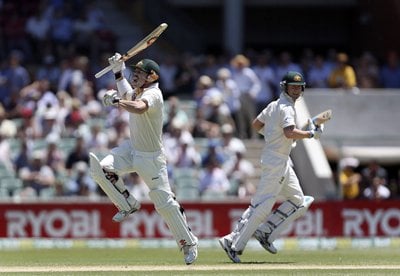 PHUKET: Michael Clarke blasted his second double-century in consecutive innings to drive Australia to a mammoth first-day total of 482-5 in the second test today as South Africa’s pace attack was brought to its knees by injury.

Captain Clarke blasted 39 fours and a six in a sparkling unbeaten 224 in bright sunshine at Adelaide Oval to demoralise the Proteas after they lost paceman Vernon Philander before play started with a back injury and Jacques Kallis with a suspected hamstring injury after lunch.

Dale Steyn, the world’s top-ranked test bowler, took himself off after tea with another suspected hamstring strain, leaving the tourists at the mercy of a withering barrage from Clarke and fellow century-makers David Warner and Mike Hussey.

Steyn later returned but the horse had already bolted as Clarke compiled a 155-run stand with opener Warner before adding another 272 runs with Hussey.

Clarke and Warner had steadied the innings after the top order collapsed to 55-3, with Kallis striking twice, but the pair hit out after lunch as South Africa captain Graeme Smith rested Steyn and threw spinner Imran Tahir to the wolves.

Clarke and Warner plundered 108 runs in less than an hour after lunch, with the latter lofting a six over bowler Tahir’s head and then stroking a sublime cover drive for four on the next bowl to bring up his third test century.

Having had his place in the test side questioned after an indifferent run of form, an ecstatic Warner bounded down the wicket and punched the air in delight as the fans squeezed into the half of the ground not under renovation roared.

The belligerent 26-year-old was eventually caught behind for 119 off the bowling of paceman Morne Morkel, having blasted 16 fours and four sixes, but Australia were in control at 210-4.

White hot
Clarke, in white-hot form following an unbeaten 259 in the drawn first test in Brisbane, barely lost step as he combined with Hussey after tea.

The 31-year-old skipper brought up his first 100 with a cut to the backward point boundary off Tahir, having survived an appeal for caught behind when on 73 off the bowling of paceman Rory Kleinveldt that umpire Billy Bowden gave not out.

South Africa referred the decision but it was turned down after a video review, the second declined for the innings, leaving the visitors with no more referrals.

As shadows crept across the ground, Clarke began a renewed assault before stumps and charged to 198 with a slogged drive over extra cover.

He flicked a single off his pads to bring up his 200th run and spark a standing ovation from a roaring crowd.

Clarke punched the air and kissed the badge on his helmet as he celebrated becoming the first batsman to surpass 200 four times in a calendar year.

The crowd was back on their feet one ball later as 37-year-old Hussey slogged over midwicket for six to bring up his 17th test century and second in succession after scoring 100 in Brisbane.

South Africa’s bowlers ended with ugly figures, with Tahir going wicketless for 159 runs, pillaged for more than seven runs an over.

The tourists face a Herculean task to turn things around at Adelaide and could lose their top test ranking should they lose the three-match series.

All-rounder Kallis had made an immediate impact when he came on in the morning, catching Ed Cowan off his own bowling for 10 with his third ball.

He then bowled Ricky Ponting for four when the former Australia captain’s footwork fell apart to leave him slumped on the deck after the ball had clattered into his off-stump.

In the over between Kallis’s strikes, Morkel had Rob Quiney caught behind for a duck by Smith at first slip.

Kleinveldt, who went wicketless on debut in Brisbane, replaced Philander in the attack. Du Plessis makes his debut in the side in place of JP Duminy, while spinner Tahir was recalled after being benched at the Gabba.