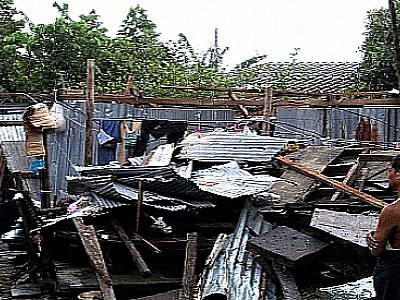 Many of the homes had portions of their roofs blown off by the strong winds, while others were battered by falling trees.

The roof of a drinking water plant flew off and fell onto two houses in the area. No people were reported injured in the incident.

In Baan Lipon, Srisoonthorn Mayor Worawut Songyot today joined the Thalang Territorial Defense Volunteers and officers from the Department of Disaster Prevention and Mitigation (DDPM) in the cleanup operation.

Mayor Worawut said the storm blew late into the night. “I was told that the storm hit hard at about 2am [today], damaging roofs and blowing trees onto houses,” he said.

“The municipality will offer some compensation to the owners of those houses damaged in the storm,” Mayor Worawut said.

He added that he will have the municipality request that the DDPM-Phuket formally recognize the area as a disaster zone so that they will be able to offer further assistance.

“I cannot stay in my own house anymore. The whole roof was blown off, and now rain falls into the house all the time,” he said.

By the time the Gazette arrived at Mr Boonkea’s home, he had already made emergency repairs to provide at least some shelter from the rain.

“They will file reports to the OrBorTor so we can prepare a budget to help people whose houses were damaged by the storm,” he said.

As of this afternoon, the Thai Meteorological Department was forecasting thundershowers and strong winds until next Thursday.