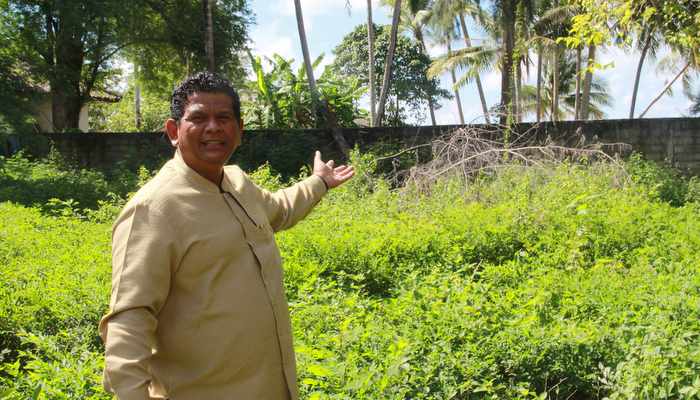 PHUKET: An illegal beach wall built near Bang Tao Beach after the tsunami in 2004 will be demolished today, officials have told the Phuket Gazette.

“We received a complaint from a local landowner who said the wall cuts off his legally-owned plot of land from the beach,” said Cherng Talay Mayor Ma-ann Samran.

“Following an inspection of the area [yesterday], I can confirm that this wall is illegally-built, as it is on public beach land. It has also been constructed without the permission of our office.”

A civil engineer from Cherng Talay Tambon Administrative Organization (OrBorTor) confirmed that any wall or fence built on beach land needed permission from their office, otherwise it would be demolished by the OrBorTor within seven days.

Kawin Varanusupak said that the wall interfered with his client’s access to the beach.

“The wall first appeared in 2008, but I don’t know how they got permission, because the Chanote [title deed] for my client’s land clearly shows that his plot is the only one facing on to the beach – which is public land.

“The person who built the wall claimed he owned a 400-square-meter plot in front of my client’s land. He then built a wall to separate it, cutting off my clients beach access,” Mr Kawin explained.

A Land Department official who was among those inspecting the boundary, said the tsunami in 2004 dumped a lot of sediment along west-coast beaches, which some unscrupulous people had tried to claim as their own land.

Mr Ma-ann said the wall would be removed today.

“We initially gave those responsible for constructing the wall a week to pull it down, but they have since contacted us to say they will demolish it today,”